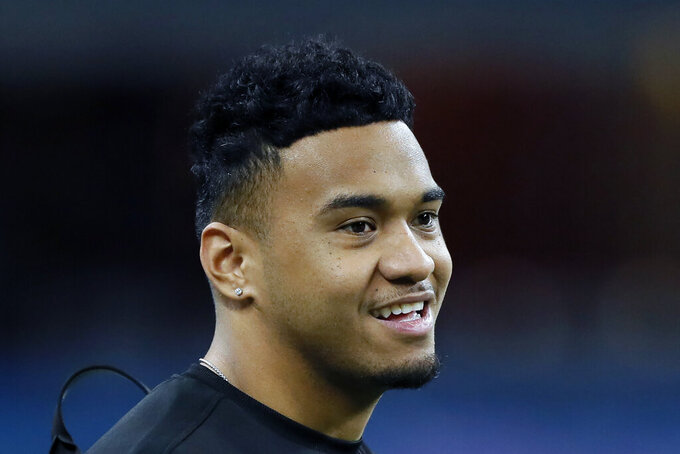 Joe Burrow has a chance to join some very exclusive company if the LSU quarterback winds up going No. 1 overall to Cincinnati.

Not only could he become the ninth quarterback to win the Heisman Trophy and then be the first overall selection in the NFL draft since 1967, that also would mark the first time in the common draft era a Heisman Trophy winner has been the No. 1 pick in three straight drafts, following Kyler Murray last year and Baker Mayfield in 2018.

Better yet, Burrow would join Cam Newton (2011) as the only quarterbacks since 1967 to become the NFL's first overall draft pick right after winning both the Heisman Trophy and the national championship.

With Tua Tagovailoa and Justin Herbert also potential top 10 picks, this could be the sixth straight year with multiple quarterbacks selected among the first 10 selections. That would be the longest such streak in the common draft era.

The NFL is very much a family business, and a pair of sons have a chance to join their fathers in making some more league history.

LSU tight end Thaddeus Moss and Minnesota defensive back Antoine Winfield Jr. could join the 11 previous fathers and sons to become first-round draft picks since 1967 if their names are called in the opening 32. Pro Football Hall of Famer Randy Moss was the 21st pick overall by Minnesota in 1998, while Antoine Winfield was the No. 23 pick by Buffalo in 1999.

Defensive end Nick Bosa was the No. 2 overall pick last year, following his brother Joey, the No. 3 overall selection in 2016, and joining father John, who went No. 16 overall in 1987. Linebacker Devin Bush Jr. was Pittsburgh's 10th pick overall, joining his father Devin Bush, the No. 26 pick in 1995.

That's only the start of the family ties ready to deepen around the NFL.

Florida WR Van Jefferson's father, Shawn, played 13 years as a receiver himself and now is assistant head coach with the Jets. Purdue tight end Brycen Hopkins' father, Brad, played left tackle for 13 seasons with the Oilers/Titans opposite Jon Runyan, who's now the NFL's vice president of policy and rules administration — and whose son, also Jon, is a guard prospect out of Michigan.

The Crimson Tide's pipeline to the NFL always has been strong. Now Alabama has a chance at something in the draft the Southeastern Conference power has never done if quarterback Tua Tagovailoa, receivers Jerry Jeudy and Henry Riggs III, and offensive tackle Jedrick Wills all get selected in the first round.

That would be the first time Alabama has had four offensive players picked in the first round. Only Southern California has managed that feat in the common draft era with Ron Yary, Mike Taylor, Mike Hull and Earl McCullouch, all taken within the first 24 picks back in 1968. Yary wound up a Pro Football Hall of Famer.

No school has had a pair of receivers selected within the first 15 picks.

In the ad, Barkley, Kittle and Fitzgerald each hold up shirts like NFL draft picks traditionally do during the draft. Barkley holds up a T-shirt supporting the handyman business owned by his brother Rashard Barkley in Pennsylvania. Kittle boosts WESTCA Gym, in San Jose, California, while Fitzgerald promotes Camelback Flowership in Phoenix, Arizona.

The commercial was devised and produced in a week following stay-at-home orders as part of Visa's NFL draft campaign to help small businesses affected by COVID-19.