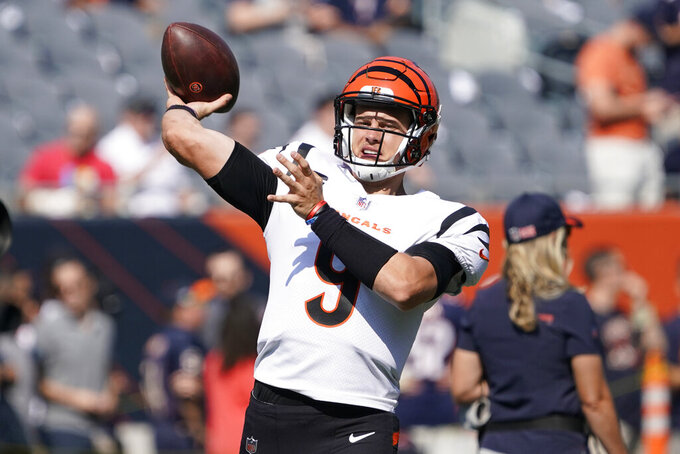 CHICAGO (AP) — Coming off one of his best games as a pro and facing a defense that struggled in a season-opening loss, Joe Burrow looked as if he might be in for another big outing.

In the end, not so much.

Burrow threw three straight interceptions in the second half, including one that got returned by Roquan Smith for a long touchdown, and the Cincinnati Bengals lost 20-17 to the Chicago Bears on Sunday.

The 2019 Heisman Trophy winner had never had a game like this as a pro or in college. He was not picked off more than once in his first 11 NFL games, and his high at Ohio State and LSU was two.

Burrow was intercepted three times in the game. And it will be up to him to regroup from this.

“I don’t know how he will respond to be honest,” receiver Ja'Marr Chase said. “I’ve never seen Joe do that myself.”

It was a strange turn, considering how effective Burrow was in a season-opening overtime win against Minnesota. He set career highs for passer rating (128.8) and yards per attempt (9.67).

But in this one?

Burrow was 19 of 30 for 207 yards. He threw two touchdowns, but the interceptions were just too much to overcome.

The Bengals were trailing 10-3 in the fourth when Burrow threw his first one. Smith leaped to haul in the ball and returned it 53 yards up the left sideline for his first career touchdown.

“You can tell that he studied that play before and he’s seen it and he pushed really, really fast and he made a very good play,” Burrow said.

On his next pass, Jaylon Johnson jumped Tee Higgins' route for the second interception. Chicago punted. But Burrow got picked off again when defensive lineman Angelo Blackson caught a ball deflected at the line, setting up a field goal that extended the Bears' lead to 20-3.

Burrow's rough afternoon came against a defense that struggled against Matthew Stafford in a primetime loss at the Los Angeles Rams last weekend. Stafford completed 20 of 26 passes for 321 yards in a 34-14 victory. He threw for three touchdowns — including one for 67 yards and another for 56 yards, thanks to major breakdowns by Chicago's secondary.

But it was a different story for Burrow.

“The Rams kind of got them on the ropes last week, getting on them early," Bengals coach Zac Taylor said. “Hitting on those deep shots and had them on the ropes a little bit. When you don’t do that to them that’s a stout front. This has been the Chicago Bears for the last five years that I have seen them. That’s what happens you play against them, so it’s just the way the game went.”

Burrow finished strong after the interception binge, helping the Bengals get within three. But it wasn't enough to pull out the win.

Burrow threw a 42-yard touchdown to Chase. Justin Fields, who played the second half after former Bengals QB Andy Dalton exited with a knee injury, got intercepted at the Chicago 25 by Logan Wilson. An 18-yard return put the ball on the 7. Burrow hit Tee Higgins with a TD on the next play, cutting it to 20-17 with 3:39 remaining.

“We waited to the last minute to take shots," Chase said. "We knew they were sitting (on short routes) the whole game. I was telling Joe. Tee knew. We just need to capitalize on the stuff we see early in the game. It’s all communication. I am not blaming it on (anybody). It’s a communication spot. We all need to be on the same page.”