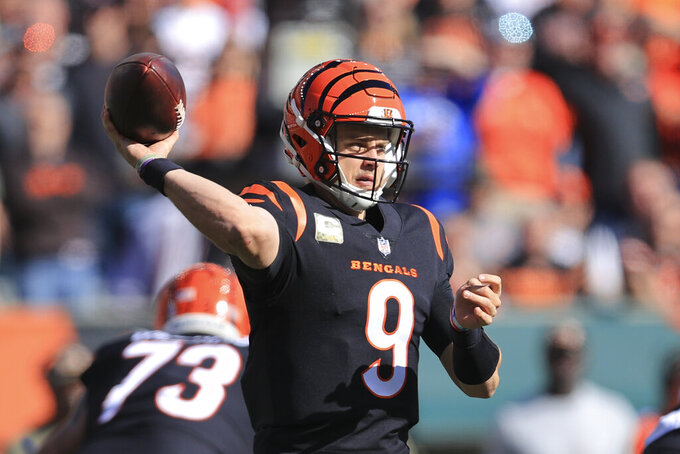 Cincinnati Bengals quarterback Joe Burrow (9) throws during the first half of an NFL football game against the Cleveland Browns, Sunday, Nov. 7, 2021, in Cincinnati. (AP Photo/Aaron Doster)

CINCINNATI (AP) — Just a yard from the end zone, Joe Burrow dropped back, cocked his arm and fired a pass he's made countless times.

Burrow's pass to rookie Ja'Marr Chase was intercepted by Denzel Ward, who returned it 99 yards for a stunning touchdown that set the tone for the Browns' 41-16 thumping of the Cincinnati Bengals on Sunday.

Burrow threw two picks and was sacked five times. Chase had a rough day with a couple key drops and a fumble as the Bengals (5-4) lost their second straight and were humiliated at home by an AFC North rival.

“I didn't play very well,” said Burrow, the Ohio native who fell to 0-3 against the state's other team. “If I play better we're in that game, we have a chance to win. I just didn't play well. That's all there is to it.”

If only it was that simple.

Cincinnati was outplayed in all three phases by Cleveland, which had its most complete game this season after parting ways with receiver Odell Beckham Jr.

The Bengals were just the opposite.

Starting with Ward's shocking pick-6, they were chasing the Browns and not gaining any ground.

In the final minutes, Burrow, who has thrown 22 interceptions, including five in his last four games, was replaced by backup Brandon Allen — a concession of surrender in a game that got away from the Bengals.

“A lot of growing is going to come from that,” said running back Joe Mixon, who scored two TDs. “A lot of lessons to be learned. It's a disappointment for us. That isn't our standard. We have to get better, that's all it is.”

The day began with promise for Cincinnati as Burrow quickly drove the Bengals into Cleveland territory on their first possession with pinpoint passes to Tee Higgins, Joe Mixon and Chase, his normally reliable wingman.

After being sacked for an 8-yard loss on 3rd-and-goal at Cleveland's 7, Burrow got a reprieve and another chance to cap the drive with a TD when the Browns were called for a penalty.

From the 3, Burrow looked to hit Chase in the right corner, but Ward jumped the route and made the pick. Cleveland's cornerback took off down Cincinnati's sideline, cut back around the 40-yard line to avoid Burrow and drop him awkwardly before scoring a TD that jump-started the Browns.

“He made a good play,” Burrow said of Ward, his teammate for three seasons at Ohio State. “I left it inside a bit. If you do that to Denzel, he's going to make you pay.”

Ward, who needed oxygen from his 100-yard dash, was asked if he had intercepted Burrow when they practiced as Buckeyes.

The Bengals had been riding high when they thrashed the division-leading Baltimore Ravens 41-17 two weeks ago.

They stumbled badly last week in losing 34-31 to the New York Jets, and now head into their bye week following another flat performance.

Coach Zac Taylor isn't worried about his team's confidence despite its loss of momentum.

“People are going to try and paint a picture of overreaction when you lose two games in a row,” Taylor said. “We're not. We're going to correct those things that we need to correct and use this bye week to get our bodies back and make sure we're healthy going into the back half of the season.”

Chase came into the game leading the league with 20.7 yards per catch. He finished with six receptions on 13 targets for 49 yards, but let a TD slip through his hands late in the third quarter and couldn't haul in a long throw from Burrow in the fourth.

Chase didn't talk to reporters after the game.