Buying or selling these NFL storylines through Week 4? 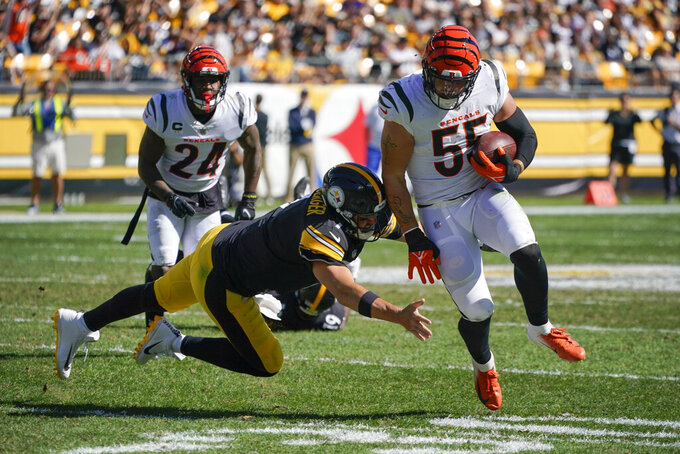 The NFL schedule isn't even a quarter complete, thanks to the expansion of the season to 17 games. Already, though, there's all sorts of chatter — some of it actually reasoned — about what's ahead. And what's occurred.

— Dallas has its best team since Jimmy Johnson (remember him?) was in charge.

— Arizona has its best team ever.

— Cincinnati has its best team since Boomer Esiason was slinging passes.

Sure, there are dozens of other such predictions or proclamations floating out there. They range from the ridiculous — Detroit will lose all 17 games; oh wait, the Lions already have done the 0-16 thing — to the sublime — Aaron Rodgers will take Green Bay to a Super Bowl title, and then take off for Pittsburgh or New Orleans or even Tampa Bay if Tom Brady finally recognizes his age.

We'll stick to the half-dozen above. For now.

What a mess, and not just because the Jaguars are 0-4 and have lost 19 in a row. Given their upcoming schedule of hosting Tennessee on Sunday; “home” for Miami in London; a bye; at Seattle; home for Buffalo; at Indianapolis; and home for San Francisco, it's conceivable that before the weak Falcons visit North Florida, the Jags will be approaching the Bucs' dubious NFL mark of 26 consecutive defeats set in their first two seasons (1976-77).

Meyer's latest mistake, though, has placed a glaring spotlight on the coach already known for his wanderlust during his college career. The 57-year-old Meyer had to apologize to his family, team and Jaguars owner Shad Khan after he skipped the flight home from a loss at Cincinnati and was captured on video with a young woman dancing between his legs while he sat on a barstool. Another video showed Meyer apparently touching her behind.

Can Meyer survive that incident? Apparently, at least for now. Can he — or will he want to — stay on through all the losing that could be ahead is the more appropriate question.

As Jimmy used to shout: “How 'bout them Cowboys?”

So far, very impressive, particularly on offense as a healthy Dak Prescott displays MVP-caliber play. A defense that would have taken abysmal as a complimentary description in 2020 is showing signs of providing balance, too.

But for those comparing America's Team to what Johnson built that led to three Super Bowl titles in four years, calm down. Let's see if the Cowboys can maintain this high level of performance in a mediocre NFC East they should dominate.

The NFL's lone remaining undefeated team also might be its most exciting. Kyler Murray throwing to an array of game breakers. A solid running game. Chandler Jones and J.J. Watt rushing off the edge, with Budda Baker a steady presence in the secondary and a strong set of young linebackers. A fearless coach in Kliff Kingsbury.

Like with Dallas, though, don't get carried away. Kurt Warner and Larry Fitzgerald took the Cardinals to a Super Bowl they nearly won in February 2009. But it's hard not to be enamored of what's going on in the Valley of the Sun.

Yes, the days of Boomer — and Ken Anderson, for that matter — are deep into the past. Even the more recent moderate success with Carson Palmer at quarterback and Marvin Lewis as coach has faded in a morass of mediocrity or worse.

Still, the Bengals seem to be headed upward; not that there was much room to go the other way. They have the building blocks on offense with QB Joe Burrow, RB Joe Mixon, some threats at receiver and, perhaps at last, a decent offensive line. In Logan Wilson, they have one of the most dynamic young linebackers, and the pass rush shows promise.

No longer the Bungles (we think), they must show they have the staying power in the always-rugged AFC North.

Yes, Ben Roethlisberger is looking old and worn. Remember, though, he has not had a complementary running game and the rebuilt offensive line is shaky at best.

Even worse, there seems to be a lethargy at times on the field, which must puzzle and deeply annoy Mike Tomlin, a coach with no tolerance for a lack of passion.

Is it time to re-evaluate everything in Pittsburgh? It probably was after last season's free fall from 11-0 to an early playoff exit.

The Saints could use Drew Brees back at quarterback — if they were getting vintage Brees. They really didn't have that guy the last two seasons.

Blaming the mystifying nature of the Saints' play thus far on his replacement, Jameis Winston, is unwise, however. What Sean Payton's team appears to lack is on-field leadership in tight situations, but that runs across the entire roster.

That said, few NFC teams have the talent base Payton enjoys in Nawlins. It's true from RB Alvin Kamara to, when he returns from injury, WR Michael Thomas, to do-everything Taysom Hill. The defense has the horses in Cam Jordan, Demario Davis and Marshon Lattimore.

No time to panic in the Big Easy.