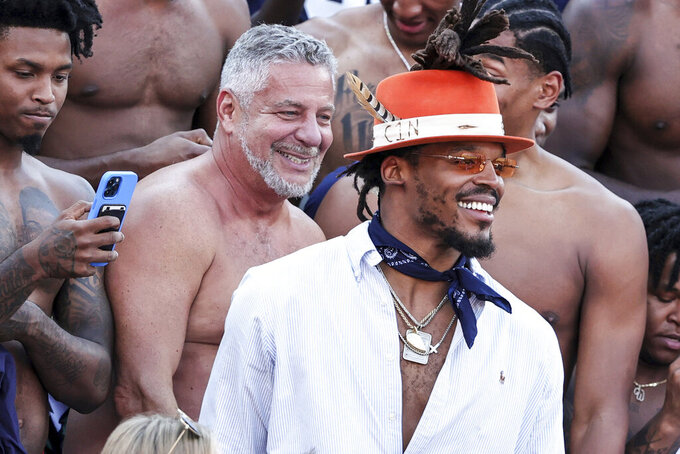 Auburn men's basketball coach Bruce Pearl, left, and former Auburn and NFL quarterback Cam Newton cheer with the fans prior to the start of an NCAA college football game against Georgia Saturday, Oct. 9, 2021 in Auburn, Ala. (AP Photo/Butch Dill)

Cam Newton says he has been vaccinated against contracting COVID-19 and is ready to return to the NFL.

The quarterback who was cut by New England just before the season began published a video on his YouTube channel saying it's time to get back into pro football. He is a free agent.

“Hell yeah, I still want to play football,” Newton said in the video. “I still get that urge to go out and perform and do something that I’ve been doing since I was 7 years old.”

The 2015 NFL MVP was the Patriots' starter for most of 2020, when they went 7-9 during a pandemic-impacted season. But New England went with first-round draft choice Mac Jones this year and released the 32-year-old Newton.

There were COVID-19 related issues for Newton last season, and he was absent for three preseason practices this summer in what the team termed a misunderstanding about protocols.

Newton was not vaccinated when he was released, but says he now is. He added that "side effects weren’t beneficial to me” for not getting the vaccine, but was not specific about those side effects.