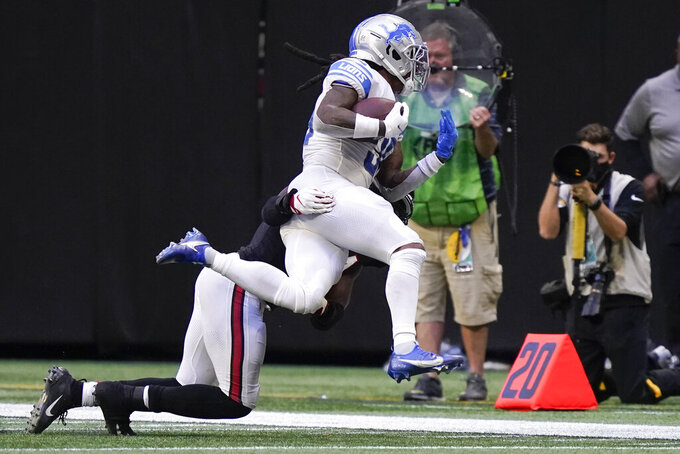 Detroit Lions running back Jamaal Williams (30) is hit by Atlanta Falcons inside linebacker Foye Oluokun (54) during the second half of an NFL football game, Sunday, Dec. 26, 2021, in Atlanta. (AP Photo/Brynn Anderson)

DETROIT (AP) — Dan Campbell has already shown himself to be an aggressive coach.

Next season, he’s hoping to be able to channel that attitude into more than moments of desperation.

This year, though, he’s just trying to keep an outgunned offense on the field. His Detroit Lions have gone on fourth down 36 times in 15 games, six more than second-place Washington and the Jacksonville Jaguars, and over twice more than successful teams such as the Tampa Bay Buccaneers (14) and Kansas City Chiefs (13).

“When you have trust in your players, there are times it just feels right,” Campbell said on Monday. “I want to send a message that we’re playing to win, and while there is a time you have to be conservative, there are also spots where my nature is to take calculated risks.”

That’s important, because Campbell needs a better team to make his chances improve for winning games instead of avoiding blowouts.

“I’d like to believe the aggressive nature will remain, but that doesn’t mean it will always be on fourth down,” he said. “It can show up on first and second down with some different things we can do. If you feel strongly about your players and your scheme, you do it.”

In a key situation on Sunday, though, Campbell didn’t have the right level of trust in backup quarterback Tim Boyle. Trailing the Falcons 20-13, Detroit faced fourth-and-5 at the Atlanta 8 with 2:42 to play.

Instead of going — something he had done twice already on the drive — Campbell brought in his kicker to make it 20-16. That left the Lions still needing a touchdown, but linebacker Jalen Reeves-Maybin forced a fumble at the Atlanta 37 with 2:18 to play. Boyle got the Lions to the Falcons 9, but was intercepted at the goal line with 33 seconds to play.

“I had to do a better job of helping Tim out on that play,” Campbell said. “I watched the tape, and I kicked myself. I should have put a back in motion to help him with the man-zone read.”

Despite the lack of results — the Lions are 2-12-1 after the loss to Atlanta — the team has made significant progress down the stretch. Going into the Week 9 bye, the Lions were scoring 16.8 points per game and allowing 30.5. Since then, they’ve gone 2-4-1 by giving up 20.3 points while scoring 17.9.

One of the league’s worst defenses has dealt with injuries, illnesses and an admitted lack of talent to become a unit that gives Detroit a chance to win every week.

“Jalen Reeves-Maybin is out there every week, making plays on defense and special teams,” Campbell said. “Alex Anzalone, before he got hurt, and Michael Brockers have been forces for us.”

In this seven-game stretch, they’ve only lost one game by more than four points — a 38-10 rout in Denver — and they looked like a contender in a 30-12 win over Arizona.

Detroit is still a long way from the postseason, but might have found the defense that will let Campbell take risks with the ball.

The Lions only averaged 93.1 rushing yards before the bye, and have improved to 135.3 in the past seven games despite using third-string running back Craig Reynolds for three weeks.

Jared Goff has struggled all season with his inability to throw the ball downfield, but Boyle hasn’t shown himself to be the answer in two starts. He’s thrown three interceptions against one touchdown, and he’s averaging just 6.8 yards per completion.

Rookie wide receiver Amon-Ra St. Brown has caught 35 passes for 340 yards and three touchdowns in the last four games. That’s almost as much production as the 39 catches for 352 yards and zero scores he put up in the first 11 games.

Offensive coordinator Anthony Lynn has lost his play-calling duties, but the unit still isn’t putting up enough points for the Lions to win on a regular basis.

Goff is back from COVID-19 protocols this week, but wide receiver Josh Reynolds has gone onto the list. Fullback Jason Cabinda could miss the final two weeks with a knee injury sustained against Atlanta.

1 — number of games the Lions need the Jaguars to win to have a chance to get the No. 1 overall draft pick.

Forget about the draft pick — Campbell certainly has — and try to build some momentum going into the offseason with games vs. Seattle and Green Bay.