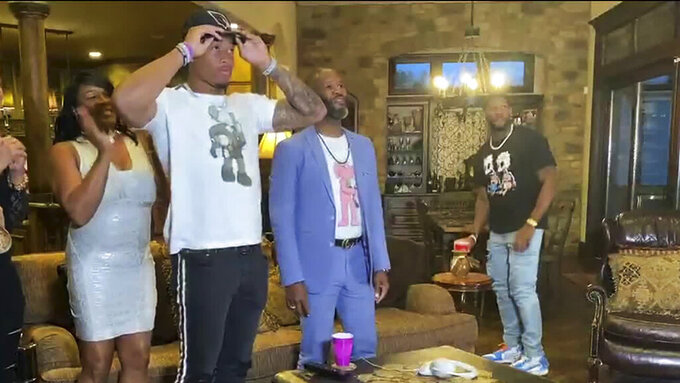 In this still image from video provided by the NFL, Isaiah Simmons places an Arizona Cardinals cap on his head during the NFL football draft Thursday, April 23, 2020, after the Cardinals selected him eighth in the draft. (NFL via AP)

Clemson's Isaiah Simmons was a do-everything defender during his college days, switching seamlessly between pass rushing, inside linebacker, outside linebacker and the secondary. Now that he's in the NFL with the Arizona Cardinals, don't expect that role to change anytime soon.

“He’s sort of a Swiss Army knife and does it all,” Arizona GM Steve Keim said. “We call that kind of a guy an eraser in this league.”

Keim and the Cardinals were thrilled when Simmons surprisingly slid to No. 8 in the draft on Thursday night. The 6-foot-4, 230-pounder is expected to be a cornerstone for the up-and-coming franchise, providing a playmaker for a defense that was among the worst in the league last season.

“It’s my 22nd draft and I’ve scouted very few guys who possess this kind of talent and production when you look at the big picture,” Keim said.

The Cardinals were expected to take an offensive tackle or a defensive lineman with the No. 8 pick but the prospect of adding the versatile Simmons proved too good an opportunity. The 21-year-old had 104 total tackles, seven sacks and three interceptions for the Tigers in 2019.

Simmons will join a Cardinals defense that was among the worst in the NFL last season and gave up the most total yards in the league. But they do have some talented players returning, including two Pro Bowl selections, linebacker Chandler Jones and safety Budda Baker.

“I bring a lot of versatility,” Simmons said. “A guy that's not narrowed down to one position. I could be used in any way to help the defense. If I need to play safety one week, linebacker one week or get after the passer, I can get all that done.”

Arizona had the No. 1 selection last season and took quarterback Kyler Murray, who had an encouraging rookie season in first-year coach Kliff Kingsbury’s offense. This time, the Cardinals decided to help the defense.

It's a strange offseason for the NFL, which won't be able to have workouts for the foreseeable future because of the coronavirus pandemic. Kingsbury said the lack of in-person instruction will affect all rookies but Simmons is well-equipped to deal with those challenges.

“Everything we've found out about the kid is he picks things up quickly,” Kingsbury said. “(Clemson) moved him around so many different places and he picked it up with no issue, wanted more and works hard at it.”

Keim didn't expect Simmons to fall to the eighth pick but he knew it was a possibility if teams above the Cardinals went on a run of selecting quarterbacks or offensive tackles. That happened when two quarterbacks — Tua Tagovailoa and Justin Herbert — were taken with the No. 5 and No. 6 selections.

After the Panthers took defensive lineman Derrick Brown at No. 7, Simmons was available. The Cardinals GM said he took a few trade calls before the team's selection but Simmons was too enticing. He added that the linebacker was rated in the top five on the team's draft board.

“He’ll find his way on the field, that’s for sure,” Keim said.

The Cardinals don't have a huge need at linebacker or safety but Keim and Kingsbury said that's a positive. Instead of needing him to fill one position, the team has the freedom to move him around and see where he fits.

“That's definitely going to help his growth process — we're not just throwing him out there and saying sink or swim,” Kingsbury said. “There will be more of a grace period, being able to move him to different spots and do different things.”

Simmons is likely the Cardinals' only chance to make a big splash early in the draft. Arizona traded its second-round pick to the Houston Texans in the trade that brought Hopkins to the desert. The team's next pick will be the 72nd overall in the third round.