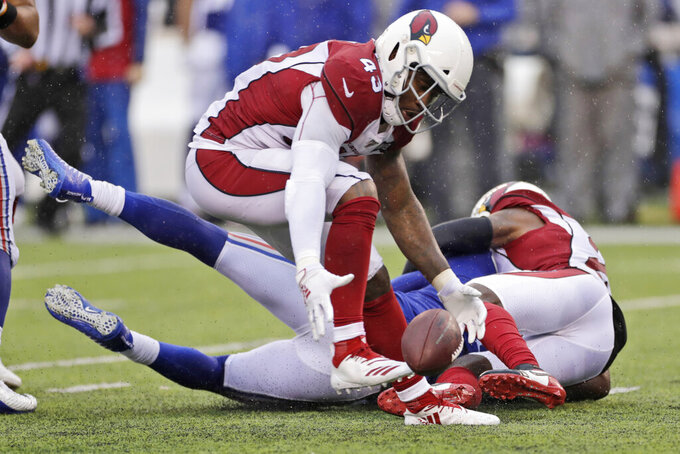 TEMPE, Ariz. (AP) — The Cardinals' offense is still trying to find its way after a day of taking bite-sized yardage chunks just outside the Big Apple.

Arizona's defense appears to be in top form after devouring the New York Giants.

The Cardinals' voracious defense made up for their inconsistent offense in a 27-21 win on a rainy Sunday, producing eight sacks and three turnovers.

After a sputtering start to the season, the Cardinals have won three straight for the first time since 2015 and improved to 3-3-1.

Arizona got a huge boost in New Jersey with the return of All-Pro cornerback Patrick Peterson following a six-game suspension for violating the NFL's policy on performance enhancers.

With their shutdown corner roaming the defensive backfield and Chandler Jones wreaking havoc up front, the Cardinals made life for Giants rookie quarterback Daniel Jones more miserable than the weather at MetLife Stadium.

Arizona had Jones running for his life most of the day, twice recovering fumbles after sacking him, including one by Peterson on a blitz. The Cardinals held the Giants to 263 total yards.

Jones had four sacks and recovered a fumble after stripping the ball from Jones.

"This is great for our team and hopefully this win will give us kind of a snowball effect and we just stack them (wins)," Jones said.

The return of Peterson gave the Cardinals a huge emotional lift. It also allowed them to do more things defensively than they had been able to do when he was out.

Defensive coordinator Vance Joseph was able to bring more pressure with Peterson roaming the secondary and his coverage often forced Jones into longer reads, causing the rookie to hold the ball longer. The combination led to Arizona's first road game with eight sacks since it had 10 against the Eagles in 1986.

Arizona's offense under Kingsbury has shown flashes of brilliance but has yet to consistently move the ball. Kingsbury took some of the blame with his play calling Sunday and heavy rain in the second half made passing the ball difficult. Running back Chase Edmonds had a big game, but the rest of the offense got muddled down, finishing with 245 total yards.

Edmonds. He was forced into a bigger role with David Johnson limited by a sprained ankle. Edmonds responded with a career-best 126 yards and three touchdowns against New York. He also had a career-high 27 carries despite vomiting in a sideline trash can after his second TD run.

QB Kyler Murray. Arizona's pass game never got untracked against the Giants, in part because of the weather. Murray finished 14 of 21 for 104 yards and made some questionable decisions, like when he ran out of bounds just before the two-minute warning instead of staying inbounds to run down the clock. On the plus side, Murray has not thrown an interception in 115 straight pass attempts and has no fumbles in 49 rushing attempts.

Johnson tested his sore ankle early in Sunday's game, but was relegated to emergency status because Kingsbury said he didn't look right. He, WR Christian Kirk (ankle) and RB D.J. Foster, who didn't play Sunday, are day to day. The Cardinals may add a running back to help with their lack of depth at the position.

3 - Arizona has not turned the ball over in three straight games and has just four turnovers in the first seven games. The Cardinals lead the NFL for fewest turnovers, one less than the Saints and Titans with five each.

Arizona's three-game winning streak came against teams that are a combined 3-18. The schedule gets much tougher from here.

Next up is a road game against the NFC South-leading New Orleans Saints (6-1), then two games in three weeks — wrapped around a game at Tampa Bay — against the undefeated San Francisco 49ers (6-0).