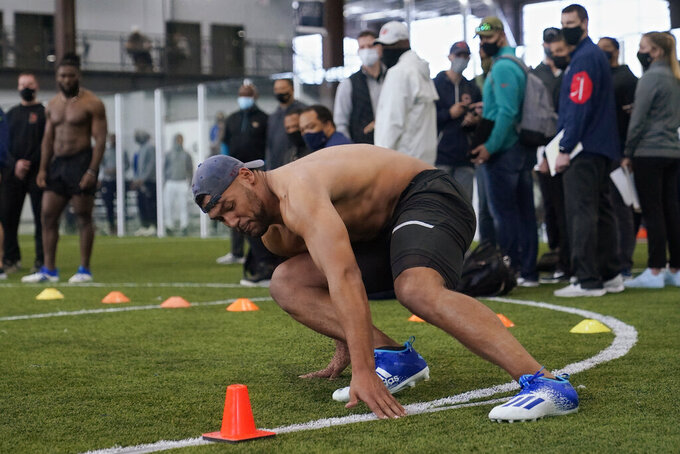 Zaven Collins' mom had to take money out of her 401K just so her son could travel to showcase football camps in high school, so that maybe a Division I college coach somewhere — anywhere — felt he was worth a scholarship.

Four years later, it's obvious that was money well spent.

The lightly recruited linebacker from a small town in Oklahoma continued his remarkable football rise Thursday night as he was selected with the No. 16 overall pick by the Arizona Cardinals.

When his name was announced, he fell out of his chair and shared tears and an emotional hug with his mom, Haley. The dream — a long journey from Hominy, Oklahoma, to college at Tulsa and then to the NFL — had come true.

“I apologize to everyone for acting like a big baby up there," Collins said. “I couldn't help it.”

Cardinals GM Steve Keim wasn't shedding tears after the pick. He was ecstatic that he believes he's found a centerpiece for his defense. If there was any question where Arizona's newest defensive player would play on the field, Keim had the answer in a hurry.

“He'll line up at Mike linebacker for us,” Keim said. “Right next to Isaiah Simmons.”

Arizona drafted Simmons with the No. 8 overall pick last season and, after a slow start, the former Clemson star became a dependable playmaker. They will put Collins next to him with the hope that the duo is able to help push the Cardinals back to the playoffs for the first time since 2015.

“What I liked about (Collins) was everything,” Keim said. “Size, football acumen, instincts, coverability. This guy has rare and unusual movement skills for a guy who is almost 6-foot-5 and 265 pounds.”

Collins — the Nagruski and Bednarik Award winner in 2020 — wasn't even sure he'd be drafted heading into last season, but he put up big numbers with 53 tackles, 11 1/2 tackles for a loss, four sacks, four interceptions, two pass breakups and a blocked kick in eight starts. He was a first team AP All-American and also the AAC Player of the Year.

Collins didn't receive much Division I interest from college coaches while playing in high school in Hominy. But he grew into a star down the road at Tulsa and brings ample size and athleticism to the position.

Kingsbury said he expects Collins to play immediately even though the Cardinals already have veteran Jordan Hicks at the position.

“Obviously, you don't take him with the 16th pick unless you expect him to play,” Kingsbury said. “He isn't a guy who is moving positions or had his hand down. He played inside linebacker. This isn't a projection, this is the position he played. We don't think the learning curve will be very steep.”

He returned two of his interceptions for touchdowns last year, including a 96-yarder in overtime to beat Tulane.

Arizona's biggest need heading into the draft appeared to be in the secondary, particularly at cornerback. Longtime Cardinals star Patrick Peterson signed with the Minnesota Vikings in the offseason, leaving a sizable hole at the position.

But the draft's elite cornerbacks were gone early when Jaycee Horn went to the Panthers at No. 8 and Patrick Surtain went to the Broncos one selection later. So the Cardinals went with another linebacker. Keim said the Cardinals talked about trading down but that Collins was rated “way too high” on their board to pass up.

The pressure is on Keim and Kingsbury to build a playoff-caliber roster around quarterback Kyler Murray, who is entering the third year of his affordable four-year rookie contract. Arizona looked like it might break its playoff drought last season but lost five of its last seven games to finish at 8-8 and miss the postseason.

Arizona will have the No. 49 overall pick in the second round Friday. They dealt their third-round pick to the Raiders in the deal that brought Hudson to the desert. Unless the team makes a trade, the Cardinals won't make another selection until Saturday with the 160th pick in the fifth round.