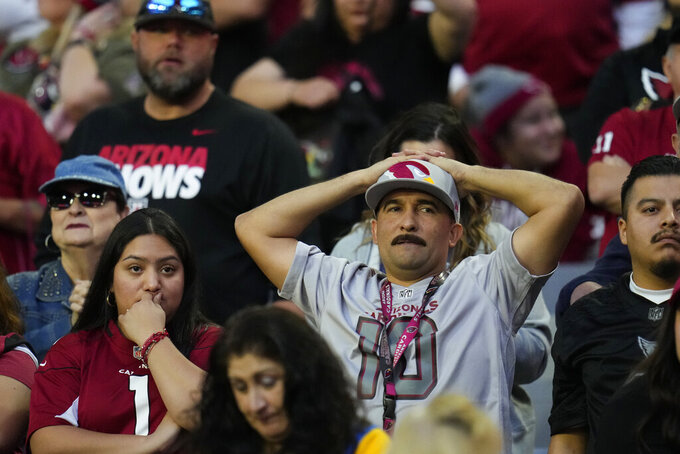 Arizona Cardinals fans watch during the second half of an NFL football game against the Los Angeles Chargers, Sunday, Nov. 27, 2022, in Glendale, Ariz. The Chargers defeated the Cardinals 25-24. (AP Photo/Ross D. Franklin)

Instead, they ended up with a swift punch to the gut.

The Cardinals (4-8) couldn't hold a fourth quarter lead Sunday, and the Los Angeles Chargers rallied for a 25-24 win. Justin Herbert hit Austin Ekeler for a 1-yard touchdown with 15 seconds left to pull the Chargers within one point and then converted a 2-point conversion to win the game.

“We didn’t finish," Cardinals quarterback Kyler Murray said. "We had every opportunity to win that game. Could have controlled it, ended it on our terms and we didn’t do it. That’s pretty much the frustration.”

That gave the Chargers one too many chances to mount a comeback.

Now the Cardinals are left to stew over those missed opportunities for the next two weeks. They don't play again until they host the New England Patriots for a Monday night game on Dec. 12.

Arizona started this season with legitimate postseason aspirations, but injuries and poor play have now made that goal a long shot. It remains to be seen how much motivation the Cardinals have when they return for the final five-game stretch.

“I still think our best football is in front of us, and that’s what we talked about was we’ve got to find a way to maximize who we are and what we put out there these last five weeks,” Kingsbury said.

"We’ve got to rest, recover, and go from there. That type of game, that type of loss when you play that hard and have moments where you look really good, you’ve got to build off that somehow and be better in these last five weeks.”

The Cardinals looked much more comfortable on offense with three-time All-Pro DeAndre Hopkins, Marquise Brown and Murray all on the field at the same time. It was the first time this season all three were healthy for the same game. All of them had good moments Sunday and their presence made the offense much more unpredictable, even with a banged-up offensive line.

The Cardinals are struggling to come up with big plays when they really need them. Linebacker Zaven Collins and cornerback Antonio Hamilton just missed potential game-changing interceptions in the fourth quarter.

Conner had his first 100-yard rushing game as a member of the Cardinals, running for 120 against the Chargers. He also caught three passes for 20 yards, including a 6-yard touchdown in the fourth quarter that gave the Cardinals a lead. Conner did have a fumble early, but otherwise was a reliable option.

Home-field advantage has basically disappeared for the franchise. They're 4-10 at State Farm Stadium since the beginning of last season.

The Cardinals hope to get some players back after the bye week, including a few starters on the offensive line such as center Rodney Hudson and right guard Will Hernandez. WR Rondale Moore (groin) and CB Byron Murphy Jr. (back) are others who could potentially return to play against the Patriots on Dec. 12.

16 — The Cardinals had three chances to take big chunks of time off the clock in the fourth quarter, but couldn't get it done. They went three-and-out on all three drives, with the nine plays gaining a total of 16 yards.

The Cardinals get their much-needed bye week. Kingsbury is giving the team a week off to recuperate, with the next practice scheduled for next Monday. It remains to be seen if the Cardinals can clear their heads, keep their motivation and be a factor in the playoff race over the final month.