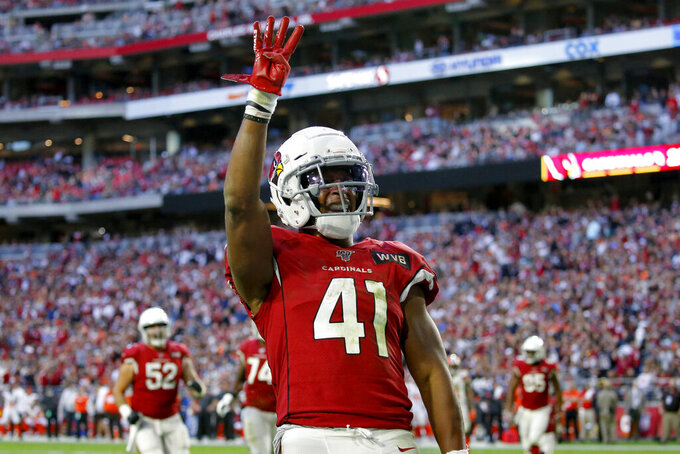 FILE - In this Dec. 15, 2019, file photo, Arizona Cardinals running back Kenyan Drake (41) motions after his fourth touchdown of the game during the second half of an NFL football game against the Cleveland Browns in Glendale, Ariz. Drake's agency said Saturday, March 21, 2020, that he will sign his one-year, $8.5 million tender to stay with the Cardinals. The Cardinals placed the transition tag on Drake earlier this week. (AP Photo/Ross D. Franklin, File)

TEMPE, Ariz. (AP) — The Arizona Cardinals have agreed to terms on a one-year deal with right tackle Marcus Gilbert and also said on Thursday that running back Kenyan Drake has officially signed his one-year transition tag.

Gilbert was expected to be the Cardinals' starting right tackle last season before a knee injury prior to the regular season opener caused him to miss all 16 games. He'll compete with Justin Murray for the starting job next year. The 32-year-old Gilbert played eight seasons with the Pittsburgh Steelers before coming to the Cardinals.

Drake's agency said on Saturday that he would sign his one-year deal valued at about $8.5 million. The 26-year-old was acquired in a midseason trade with the Miami Dolphins and played well in the desert, running for 643 yards and eight touchdowns in eight games. He's expected to be the Cardinals' primary option in the backfield after David Johnson was traded to the Houston Texans for receiver DeAndre Hopkins.

37 minutes ago
By Pat Graham 2 hrs ago
By Arnie Stapleton 6 hrs ago
By W.g. Ramirez 9 hrs ago
By Brett Martel 11 hrs ago