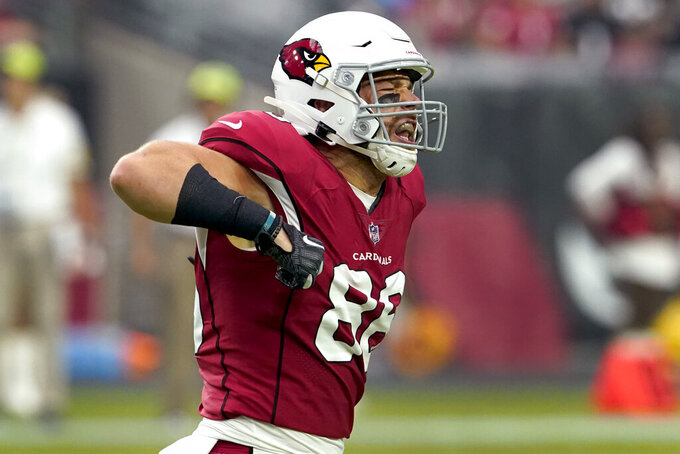 Arizona Cardinals tight end Zach Ertz (86) reacts after making his first reception as an Arizona Cardinal during the first half of an NFL football game against the Houston Texans, Sunday, Oct. 24, 2021, in Glendale, Ariz. (AP Photo/Darryl Webb)

GLENDALE, Ariz. (AP) — Tight end Zach Ertz has been with the Cardinals for just nine days and already has the longest touchdown catch of his nine-year career, rumbling 47 yards toward the end zone to put an exclamation point on Arizona's 31-5 win over the Houston Texans on Sunday.

With a wide grin, Ertz said joining the NFL's hottest team is quite a thrill.

“I've never seen so much green grass in the middle of the field,” Ertz said. “That's going to happen when you have DeAndre Hopkins and A.J. Green on the outside and a quarterback like Kyler.”

The Cardinals scored 31 unanswered points to remain the NFL's only undefeated team, improving to 7-0 for the first time since 1974. The Texans (1-6) — who looked totally overmatched for three quarters — have lost six straight games.

Arizona fell into an early 5-0 hole after a slow offensive start, but recovered to win easily. The Cardinals were a 20½-point favorite, according to FanDuel, which is a massive spread for an NFL game.

“It was a game we should have won,” Cardinals linebacker Isaiah Simmons said. “And we did.”

Kyler Murray completed 20 of 28 passes for 261 yards, three touchdowns and one interception. The interception was his first since Week 3, but it was one of the rare bad moments in another solid day.

James Conner added an 18-yard touchdown run. Ertz had three catches for 66 yards and a touchdown one week after being acquired from the Philadelphia Eagles in a trade.

It was the first time Hopkins and J.J. Watt had played against Houston, which is where both grew into stars before coming to the Cardinals. Watt signed with Arizona during the past offseason while Hopkins was acquired by the Cardinals in a trade in 2020.

Both had good moments on Sunday. Hopkins caught a 1-yard touchdown in the second quarter while Watt added a tackle for loss.

The Texans jumped out to a 5-0 lead after a terrible offensive start for the Cardinals.

Houston earned a safety and a 2-0 advantage late in the first quarter when Murray tried to scramble out of the end zone and was sacked by Jacob Martin. Murray was shaken up on the play and briefly went into the sideline medical tent for evaluation before returning for the next drive.

Houston's Ka'imi Fairbairn added a 53-yard field goal on the first play of the second quarter for a 5-0 lead. That was the high point for the Texans, who couldn't do much right from that point forward.

“We are going to stay together,” Texans coach David Culley said. “There is a process we are going through. We don’t like where we are right now.”

The Cardinals restored order in a hurry, responding with two touchdowns and a field goal before the break for a 17-5 halftime advantage. The second touchdown was set up by a beautiful throw and catch from Murray to Green down the sideline that went for 41 yards on third-and-24. Murray found Christian Kirk for a 5-yard touchdown two plays later.

Cardinals coach Kliff Kingsbury was back on the sideline Sunday after eight days away from the team because of a positive COVID-19 test. The 42-year-old, who is fully vaccinated, was cleared at about 6:30 a.m. on Sunday, several hours before the game. Kingsbury praised his assistant coaches — particularly Vance Joseph and Jeff Rodgers — for keeping the Cardinals on task.

“It's a long week just sitting at home when you know those guys are working,” Kingsbury said.

The Texans once again didn't score a touchdown, failing to find the end zone for the third time in four weeks. Rookie Davis Mills is now 0-5 as the team's starting quarterback. He completed 23 of 32 passes for 135 yards.

Houston's defense started well, but wore down as the game progressed. Arizona had a 397-160 advantage in yards.

“Losing is always tough,” defensive end Jonathan Greenard said. “You can’t find one guy that loves to lose. Every loss we can build from it. You can’t sit here and cry about it. It sucks but we still have 10 games to play. We can’t sit and drown our sorrows. We lost.”

Ertz — a three-time All-Pro selection — had a spectacular first catch with his new team. Murray threw over the middle to Ertz, but the ball was behind the tight end, who reached behind his body and with his left hand and was able to corral the one-handed grab.

The crowd cheered after the catch and roared even louder when they realized it was Ertz.

The Texans host the Rams next Sunday.

The Cardinals have a quick turnaround, hosting the Green Bay Packers on Thursday night.