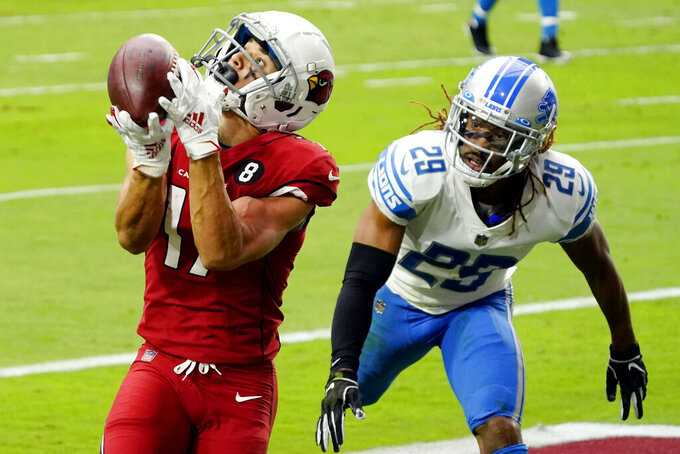 GLENDALE, Ariz. (AP) — Arizona Cardinals second-year quarterback Kyler Murray isn't playing scared on the field. For coach Kliff Kingsbury, that's cause for celebration and a reason to reach for the Rolaids all at the same time.

“He’s definitely pushing the envelope,” Kingsbury said Monday. “He’s trying to make a lot of plays and create, and you've got to walk that fine line. Some things didn’t go our way yesterday.

“He's going to be aggressive. That's what we want.”

Murray threw for 270 yards and two touchdowns in a 26-23 loss to the Detroit Lions on Sunday and ran for a 1-yard score. The 23-year-old also had three interceptions when he tried to fit throws into tight windows. Kingsbury said his quarterback had some bad luck that contributed to the turnovers, particularly on the first one when his arm was hit while he was throwing.

The interceptions were a big reason the Cardinals (2-1) lost their first game of the season, falling to the previously winless Lions at State Farm Stadium. Now Arizona has three straight road games that will test how it responds to adversity.

Murray — as always — took ownership of his mistakes against the Lions. He also is not going to dwell on them.

“Obviously I feel like if I don’t turn the ball over three times today, we put ourselves in a better chance to win that game,” Murray said Sunday. "But it’s over now, on to the next game. We just have to be better.”

Despite Kingsbury's passing acumen, the Cardinals have established that they can and will run the football.

They are seventh in the NFL with about 150 yards rushing per game. The combo of Murray, Kenyan Drake and Chase Edmonds has been effective, and the offensive line has usually been able to open running lanes.

It's three games into the season and the Cardinals still haven't intercepted an opponent. Generally speaking, the team's defense has been much improved in 2020, but there's nothing that changes games quite like turnovers.

Arizona was tied for last in the NFL last season with seven interceptions.

“We'd like to take the ball away more,” Kingsbury said. “There’s no question.”

WR Andy Isabella. Last year's second-round pick was often nonexistent in the Cardinals' offense last season and it looked like the team might have a bit of a bust. But the 5-foot-9, 188-pounder has carved out a role this year, and his two touchdown catches against the Lions are proof that he can make big plays.

“Love Andy," Murray said. "I’ve been telling you all what he’s capable of. Glad to see him get his opportunity today.”

WR Larry Fitzgerald. One of the game's greatest receivers had one of his quietest games on Sunday. He was targeted just three times and finished with one catch for zero yards.

The 37-year-old Fitzgerald isn't the No. 1 receiver anymore, which is expected since DeAndre Hopkins was added during the offseason. But the Cardinals need to get Fitzgerald involved for the offense to be at its peak.

The Cardinals are suddenly short at safety after injuries to Budda Baker (thumb), Jalen Thompson (ankle) and Chris Banjo (hamstring). Kingsbury said he is evaluating whether Arizona can fill the position within or needs to hit the free-agent market.

One option is moving rookie linebacker Isaiah Simmons to safety. He was the No. 8 overall pick and part of his appeal is versatility. He played several positions in college, including safety.

“I think he is unique in that there was somewhat of a comfort level playing multiple positions coming from Clemson," Kingsbury said. "He obviously has learned an entirely new defense, new terminology, new scheme, but he has a feel for it at multiple positions. And I think that will help the learning curve.”

8 — The Cardinals ran just eight offensive plays in the fourth quarter against the Lions and scored no points. Arizona's quick-tempo offense is usually at its best during the fourth quarter when the other team is tired, but it couldn't get anything going on Sunday.

The Cardinals didn't face much adversity through the season's first two weeks. They won both games and stayed relatively healthy. Now they're thin in the secondary and have three straight road games beginning with a trip to the Carolina Panthers on Sunday. How Arizona bounces back will go a long way toward deciding if this team is a legitimate contender in the NFC West.