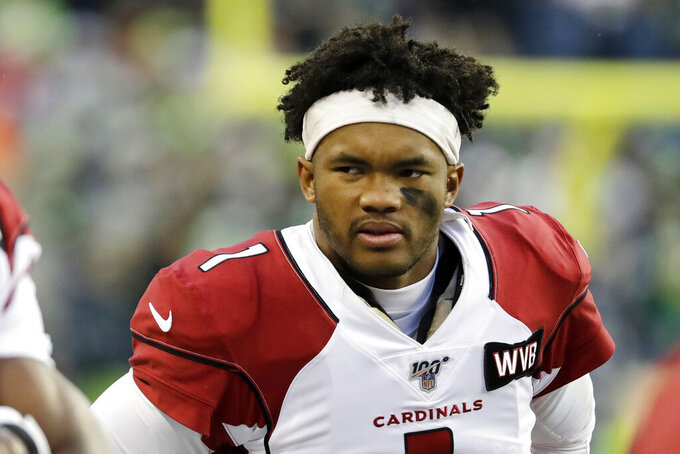 FILE - In this Dec. 22, 2019, file photo, Arizona Cardinals quarterback Kyler Murray watches from the sideline after getting injured in the in the second half of an NFL football game against the Seattle Seahawks in Seattle. Murray says he’ll be kneeling for the national anthem this season. The Cardinals’ emerging star wasn’t particularly vocal about social issues during his first season but said that would change in the aftermath of the killing of George Floyd, a black man, while in police custody in Minneapolis (AP Photo/Lindsey Wasson, File)

Quarterback Kyler Murray says he'll be kneeling during the national anthem this season.

The Arizona Cardinals' emerging star — who was the NFL's Offensive Rookie of the Year in 2019 — wasn't particularly vocal about social issues during his first season but said that would change in the aftermath of the killing of George Floyd, a black man, while in police custody in Minneapolis.

“Yeah, I'll be kneeling,” Murray said Wednesday. “I stand for what's right, that's the bottom line. I call it like I see it. What's been going on is completely wrong. I'll definitely be taking a knee.”

The 22-year-old Murray said he didn't have a lot of bad experiences with the police growing up but added that he was lucky because he's usually recognized as a famous football player. The quarterback said the “peaceful protests, I think they're amazing” and he is confident younger people will be the catalyst for real progress.

“I do feel like we'll see change,” Murray said. “Just because my generation, we're so diverse. We know what racism is but I feel like there's not a lot of it in my generation.

"I know generations above me, my parents' generation, there's a lot of racism, whether we want to believe it or not, there is. There's a lot of hate in this world, but I think what's happening, what we're seeing right now, is huge.”

Murray joins other NFL players who have indicated they'll be kneeling during the anthem this season, including Browns quarterback Baker Mayfield. Murray and Mayfield are close friends who were teammates in college at Oklahoma and who won the Heisman Trophy in back-to-back seasons.