Cardinals take OT Jones in third round to protect Murray 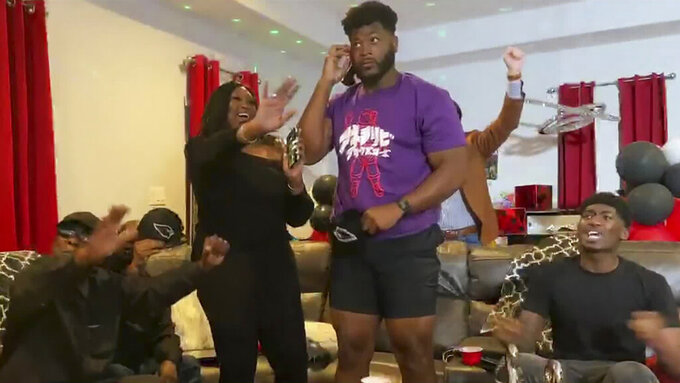 In this still image from video provided by the NFL, Josh Jones, center, talks on the phone as he is selected by the Arizona Cardinals during the third round of the NFL football draft, Friday, April 24, 2020. (NFL via AP)

Josh Jones expected to hear his name called in the first or second rounds of the NFL draft but after 60-plus picks he was still sitting at home with family in awkward anticipation. Finally, with the No. 72 selection, Arizona grabbed him in the third round.

Now the big offensive tackle is ready to show the Cardinals they made the right decision.

“They got a great ballplayer,” Jones said. “I'm going to make those other guys kick themselves in the butt for missing on me.”

The Cardinals used their third-round pick to add a protector for young franchise quarterback Kyler Murray. The 6-foot-5, 320-pounder played in college at Houston and should have the opportunity to earn immediate playing time at right tackle. Many draft projections had Jones being selected much sooner and Arizona GM Steve Keim said Jones was in his top 30.

“I'm shocked,” Keim said. “It's certainly not a player I anticipated seeing at that 72nd spot.”

Arizona coach Kliff Kingsbury — who has been a hit on social media because of the shots of his posh house in Paradise Valley, Arizona — already has good insight into Jones' ability. Kingsbury recruited Jones during his time at Texas Tech and is close with Houston coach Dana Holgerson, who helped Kingsbury get his start in coaching.

“Good karma I think,” Kingsbury said. “We definitely had some relationships there.”

Jones played mostly left tackle in college but said he didn't expect it to be a problem to switch to the right side.

“I would definitely feel comfortable switching to right if that's what they ask me to do, it's whatever the team needs,” Jones said. “I'm here to do it. If it's right tackle, guard, anything, I'm athletic and I can switch my stance. I've been working at it this whole draft process.”

Murray was sacked 48 times last season and the Cardinals would like to find a way to keep him upright more often in 2020. Jones will likely compete for playing time at right tackle with returners Justin Murray and Marcus Gilbert. Justin Murray was the surprise starter for most of last season — and played fairly well — after Gilbert suffered a season-ending knee injury in the preseason.

Jones' selection filled an obvious need for the franchise. The Cardinals signed left tackle D.J. Humphries to a long-term deal during the offseason but were searching for a potential upgrade on the right side. Jones already has a friend in Phoenix: He played high school basketball with Kelly Oubre Jr., who is in the NBA with the Phoenix Suns.

Jones was the Cardinals' only pick Friday. Arizona didn't have a second-round pick for a good reason. They sent it to the Houston Texans in March as part of the widely praised trade that brought elite receiver DeAndre Hopkins to the desert.

Arizona helped its defense during Thursday's first round, grabbing the versatile Isaiah Simmons, who surprisingly slid to the No. 8 selection. The 6-foot-3, 240-pound Simmons played a variety of positions during a stellar college career at Clemson and could help the Cardinals at both linebacker and safety next season.