Cardinals try to move to 7-0 against struggling Texans 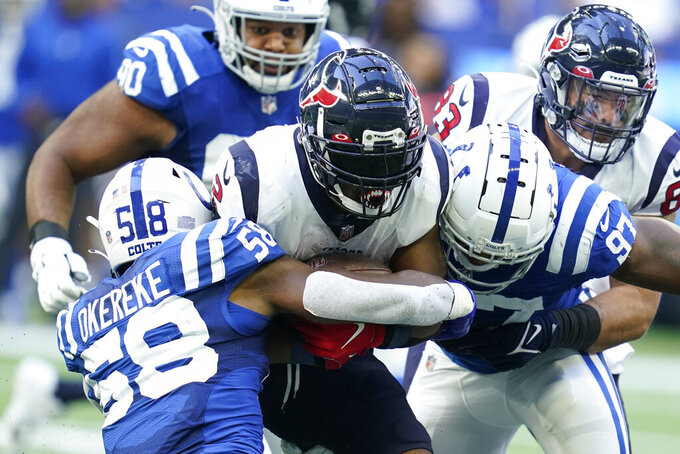 Houston Texans' Mark Ingram (2) is tackled by Indianapolis Colts' Bobby Okereke (58) and Al-Quadin Muhammad (97) during the second half of an NFL football game, Sunday, Oct. 17, 2021, in Indianapolis. (AP Photo/Michael Conroy)

OPENING LINE: Cardinals by 17 1/2, according to FanDuel SportsBook.

TURNOVER DIFFERENTIAL: Texans minus-3; Cardinals plus-8.

TEXANS PLAYER TO WATCH: Rookie WR Nico Collins, a third-round draft pick, had four receptions for 44 yards in his return last week after missing three games with a shoulder injury and could be a bigger part of the offense Sunday. “He makes it tough on defenses to cover him because he can do a lot, both vertically and in the intermediate routes and short routes,” quarterback Davis Mills said. “He’s a good target to have out there.”

CARDINALS PLAYER TO WATCH: DE J.J. Watt will be facing his former team and has played some of his best football in recent weeks. The three-time NFL Defensive Player of the Year earned his first sack in last week's game against the Browns and deflected a pass in the fourth quarter two weeks ago to help the Cardinals hold on against the 49ers.

KEY MATCHUP: Like Watt, Cardinals WR DeAndre Hopkins will certainly want to have a good game against the team that traded him to Arizona before the 2020 season. Hopkins has caught three TDs over the past two weeks, including two in last week's win. The Texans' secondary has been in the middle of the NFL pack this season. Lonnie Johnson and Justin Reid both have two interceptions.

KEY INJURIES: For the Texans CB Terrance Brooks is out after sustaining a bruised lung Sunday against the Colts. ... C Justin Britt missed practice this week and could sit out for a second straight game with a knee injury. ... QB Tyrod Taylor is improving but isn’t ready to return from a hamstring injury sustained in Week 2. ... WR Danny Amendola could return this week after missing four games with a thigh injury. ... For the Cardinals, C Rodney Hudson (ribs) was placed on injured reserve last week. ... RT Kelvin Beachum (ribs), LB Jordan Hicks (toe/ankle), LB Devon Kennard (shoulder) and G Justin Pugh (back) were among the starters who didn't practice on Wednesday. ... The Cardinals are still dealing with COVID-19 issues that popped up last week. They hope that head coach Kliff Kingsbury, quarterbacks coach Cam Turner, defensive linemen Corey Peters and Zach Allen, and linebacker Chandler Jones will be able to return after missing the Browns game.

SERIES NOTES: The home team has won every game of the four-game series, the bigget margin being 11 points.

STATS AND STUFF: The Texans are trying to snap a five-game losing streak. ... Texans RB David Johnson will be playing against his former team. He was an All-Pro for Arizona in 2016. Johnson was part of the trade that brought Hopkins to the Cardinals. Johnson has 79 yards rushing on 20 carries this season. He's also second on the team with 14 receptions. ... Texans RB Mark Ingram has 7,609 career rushing yards, No. 1 among active running backs. ... The Cardinals are trying to improve to 7-0, which would tie the franchise record (1974) for best start to a season. They finished 10-4 while based in St. Louis. ... TE Zach Ertz is expected to make his debut for the Cardinals after they acquired him in a trade with the Philadelphia Eagles last week. Ertz is a three-time Pro Bowl selection with 38 career touchdown catches. ... Cardinals LB Markus Golden has four sacks and three forced fumbles this season. ... Arizona has scored an NFL-best 55 points off turnovers this season.

FANTASY TIP: Arizona's defense has suddenly become one of the NFL's best. A matchup against the 31st scoring offense in the league is certainly enticing.