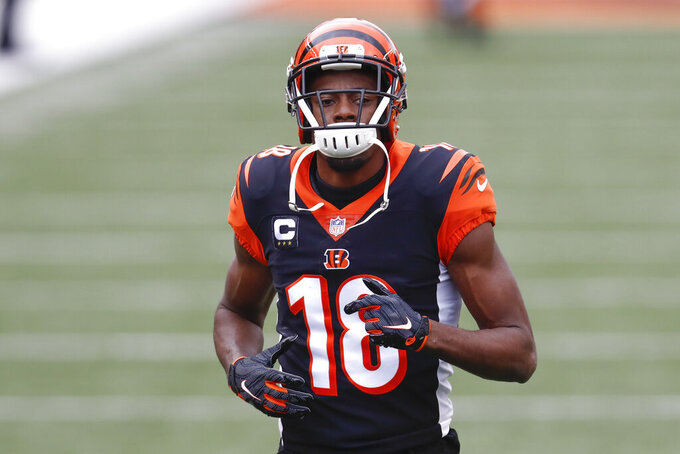 The Cardinals acquired Hudson and a seventh-round pick in the upcoming draft from the Raiders and will send a third-round pick back to Las Vegas.

The 32-year-old Green gets about $8 million. He has played nine seasons in the NFL, all for the Cincinnati Bengals. He made the Pro Bowl in each of his first seven seasons from 2011 to 2017. Green missed the entire 2019 season with an ankle injury but returned in 2020 and caught 47 passes for 523 yards and two touchdowns.

With the Cardinals, Green will team with DeAndre Hopkins, who caught 115 passes for 1,407 yards and six touchdowns last year. Arizona is still waiting for word if receiver Larry Fitzgerald will return for his 18th season or retire.

In six seasons with the Raiders, Hudson has been the anchor of what has been one of the better offensive lines in the league. He made Pro Bowls in 2016, ’17 and ’19 and was a second-team All-Pro in 2019 as well. He played in 94% of the team’s offensive snaps, missing only three games in 2015 and one in 2019. He played every snap in each of the other four seasons.

Hudson has been an elite pass-blocking center, working closely with quarterback Derek Carr on handling the protection schemes before each snap.

In Arizona, he'll be charged with keeping third-year quarterback Kyler Murray from getting hit as the Cardinals try to push for the playoffs for the first time since 2015.

In 3,703 pass blocking snaps with the Raiders, Hudson has allowed only three sacks and six quarterback hits, according to Pro Football Focus. He also has been penalized just seven times in the past four seasons.

The 36-year-old Prater, who kicked the longest field goal in NFL history, 64 yards, while with Denver in 2013, has spent the past seven seasons with the Detroit Lions. He's made 321 career field goals and 83.2% of field goal attempts during his 14 years in the league.

Adding Prater means Zane Gonzalez's days with the Cardinals are likely done. Gonzalez made 16 off 22 field goals last season but had a few crucial misses in close games during 2020.

The Cardinals also announced on Wednesday they re-signed linebacker Tanner Vallejo to a two-year deal. The 6-foot-1, 230-pounder was particularly valuable in 2020 on special teams, where he tied for a team-high with 15 tackles.

Arizona has been aggressive during free agency the past two offseasons, trying to build a competitive roster around Murray, who is entering the third year of his four-year rookie contract. The Cardinals finished with an 8-8 record last year, losing five of their past seven games to finish just shy of the playoffs.