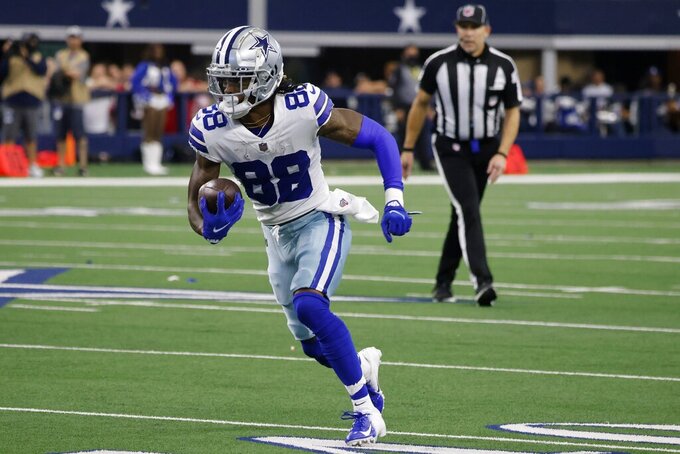 Dallas Cowboys wide receiver CeeDee Lamb (88) gains yards after a catch in the second half of an NFL football game against the Atlanta Falcons in Arlington, Texas, Sunday, Nov. 14, 2021. (AP Photo/Michael Ainsworth)

It’s difficult to believe we’re already at Week 11, but here we are with all the top contenders to score in hand no less. These are my best bets to find the end zone in Week 11.

You can’t make a list such as this and not consider Conner every week, as he’s the league leader in scoring (12 TDs). Somehow, Conner has maintained a ludicrous 53.37% TD dependency through 10 weeks, and he’s going to continue to get opportunities, especially with Chase Edmonds out at least a few weeks. In Week 11, Conner faces our fourth-best matchup for RBs, the Seahawks, who’ve allowed the third-most points to RBs this season.

After a somewhat slow start to the fantasy season, Mixon is on a roll, scoring six TDs over the past six weeks. This week, Mixon faces the Raiders, who are our sixth-best matchup for RBs going into Week 11. Mixon will be fresh out of his bye week, and he had the best fantasy game of his season the week before, so expect him to keep rolling with his healthy 39.42% TD dependency.

Chubb had the best game of his season in Week 9, scoring twice and gaining more than 160 yards, before getting placed on the COVID-19 list in Week 10. Chubb is vaccinated, so he should be back for this week’s matchup with Detroit, our second-best matchup for RBs. The Lions have allowed 16 TDs to RBs this season.

The league leader for RBs in snap count, Harris has either scored or surpassed 125 yards the past three weeks since his team's bye. He’ll face a Chargers team this week that has a formidable secondary but is our sixth-best matchup for opposing RBs going into Week 11. Harris manages to be productive in the Steelers offense, and we should expect nothing less on Sunday.

Aaron Jones is out for at least a game or two with an MCL sprain, so that leaves the bruiser Dillon to man the Packers backfield in Week 11 against a top 10 RB matchup in the Vikings. Dillon showed he can find the end zone last week when he had two touchdowns in relief of the injured Jones, so he shouldn’t have much trouble scoring versus Minnesota.

The Buccaneers are angling for a playoff run, so they aren’t in a hurry to rush Antonio Brown and Rob Gronkowski back onto the field. This dearth of targets for Tom Brady has made Evans into a red zone lightning rod, as he’s scored five times in the past three weeks. The 47.12% TD dependent Evans gets a Giants squad that is middling at best against WRs this week, so plan on him being on the receiving end of at least one TD grab.

Smith has come alive in recent weeks, scoring three TDs in his past two games. He faces our fourth-best matchup for opposing WRs this week, the Saints, so he’s an odds-on favorite to find the end zone at least once more against a team that has allowed 10 TDs to WRs so far.

Lamb has evolved into the leading WR for the Cowboys, going over 100 yards or scoring in four of his past five games. He’ll face the Chiefs in what might be the highest-scoring game we see this season. Coming off two touchdowns in Week 10, Lamb won’t let you down in Week 11.

If the Cowboys are going to score at will, we can expect the Chiefs to counter in a similar manner, and Hill will be a major part of that effort. Coming off his second multi-TD week this season, the 34.88% TD dependent Hill is a better bet than most to find the end zone in Week 11 against a Cowboys defense that is opportunistic but not impervious. In fact, they’re our sixth-best matchup for opposing WRs.

Diggs has flown under the radar this season it seems, but he’s actually been quite productive, scoring in three of his past four games. He’s coming off the best game of his season in Week 10, and he’s primed to keep building in Week 11 when Diggs will face the Colts, our second-best matchup for opposing WRs. No team has allowed more TDs (15) to WRs.