Career start No. 127 the biggest of them all for Derek Carr 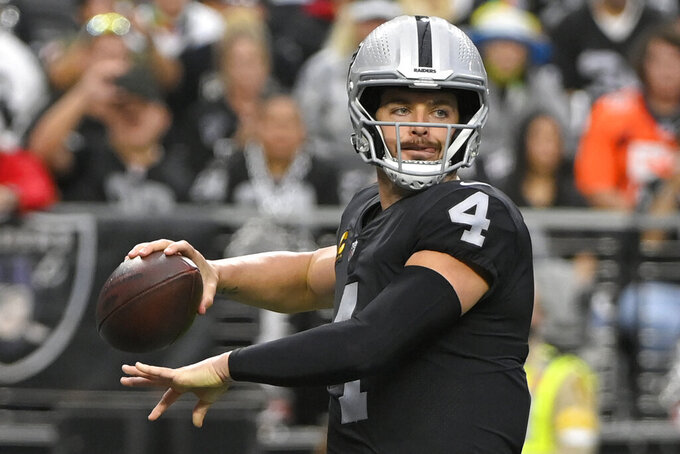 Las Vegas Raiders quarterback Derek Carr (4) looks to pass against the Denver Broncos during the first half of an NFL football game, Sunday, Dec. 26, 2021, in Las Vegas. (AP Photo/David Becker)

There has been none bigger than No. 127.

Carr will lead the Las Vegas Raiders into the NFL’s final game on Sunday night against the Los Angeles Chargers in what likely will be an all-or-nothing showdown between AFC West rivals.

For Carr, who has one year left on his contract and who has expressed his feelings about being a Raider for life, the game on Sunday is the most consequential of his career.

“If you look back to the last three games, they’ve all been the biggest games of our career,” Carr said Wednesday. “I feel like that’s kind of been the feeling around our team and around my heart for the last month. And so, this one’s exciting, obviously, because it’s the last one and it really tells you what happens. But at the end of the day, I feel like the last month we’ve been playing in our playoffs.”

That’s because a 1-5 skid that followed a 5-2 start to the campaign left the Raiders near the bottom of the AFC standings.

Suddenly, though, a three-game win streak — including road wins in Cleveland and Indianapolis after Carr led last-minute, game-winning drives — has Las Vegas on the brink of pulling off what seemed unimaginable less than a month ago.

The Raiders will make the playoffs for the second time in the past 19 seasons with a win. They also could sneak in with a loss if both Indianapolis and Pittsburgh lose, but the most direct path to extending the season would be win No. 57 for Carr.

Not to mention give Carr his first opportunity to compete in the playoffs.

While there’s no been no denying his ability to lead game-winning drives during his career, a win Sunday could silence the detractors who’ve questioned whether Carr is a quarterback who can lead a franchise to a championship, let alone the postseason.

Carr is one of 89 quarterbacks to start 100 or more games during the Super Bowl era (126). He joins Ryan Fitzpatrick (147) and Archie Manning (139 starts) as the only ones never to appear in a playoff game.

“He’s definitely ready for this,” Raiders defensive end Yannick Ngakoue said. “Just seeing over the course of these last couple of weeks, just the confidence and fire that I see from him. I love it. Super happy for him to be in this moment and I know he’s going to get the job done.”

Despite the tumultuous off-field distractions the Raiders have dealt with following Jon Gruden's sudden resignation over an email scandal in October and star receiver Henry Ruggs III's release after a fatal DUI crash in November, Carr has continued to be the face of the franchise.

He's been a leader in the locker room and helped the team overcome adversity along the way while putting together a rather impressive season statistically. He ranks fourth in the NFL with 4,618 yards passing this season.

Carr hasn't been quite as sharp of late, turning the ball over at least twice in his last four starts as the Raiders have scored more than 17 points just twice in the past nine games.

But Carr has stepped up in key spots, leading fourth-quarter comebacks to beat both the Browns and Colts.

“What I love about Derek is when things get real, when things get like, ‘it’s time to go,’ he got it done,” linebacker KJ Wright said. “We know this game is going to be tight. We know it’ll probably come down to a two-minute drill, and I know Derek Carr is going to find a way to get it done. He’s a quarterback I always respected. Hopefully, we can just seal this deal and get this thing started.”

NOTES: TE Darren Waller, who was activated from the reserve/COVID-19 list on Wednesday along with DE Carl Nassib and OL Jordan Simmons, returned to the practice field for a walk-through session. Waller hasn’t played since injuring his knee and back during a Thanksgiving Day win over the Cowboys. ... DT Johnathan Hankins (back) missed the session. ... RB Josh Jacobs (ribs), S Tre’von Moehrig (shoulder) and LB Denzel Perryman (ankle) were limited. ... WR DeSean Jackson and C Nick Martin were granted veteran rest days. ... Las Vegas released LB Will Compton and waived LB Justin March-Lillard.