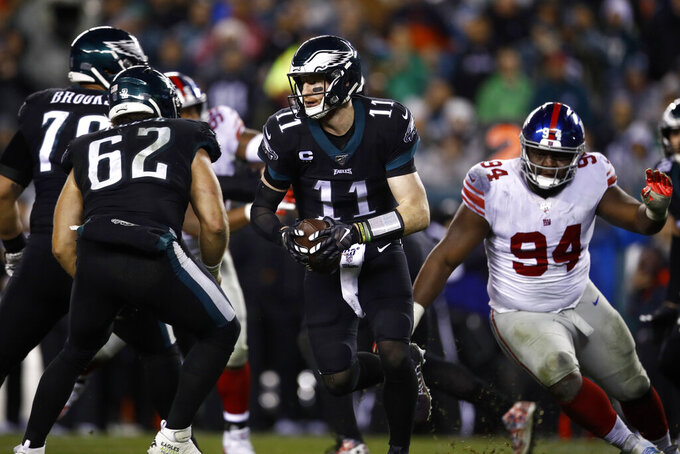 Philadelphia Eagles' Carson Wentz plays during the first half of an NFL football game against the New York Giants, Monday, Dec. 9, 2019, in Philadelphia. (AP Photo/Matt Rourke)

PHILADELPHIA (AP) — Carson Wentz and the practice squad kept the Philadelphia Eagles in control of their playoff hopes.

Now they have to keep winning.

The Eagles (6-7) snapped a three-game losing streak and moved into a tie for first place with Dallas (6-7) in the NFC East by rallying from a 14-point deficit to beat Eli Manning and the New York Giants 23-17 in overtime on Monday night.

Philadelphia wins the division if it wins its final three games, including a rematch against the Cowboys in Week 16. The Eagles lost 37-10 at Dallas in October.

Wentz was 33 of 50 for 325 yards and two touchdowns against the Giants. None of his completions went to Philadelphia's top three wide receivers: DeSean Jackson, Alshon Jeffery and Nelson Agholor. Jackson had season-ending abdominal surgery, Agholor didn't play because of a knee injury and Jeffery left with a foot injury in the first half.

However, Wentz had 15 completions for 140 yards to players who were on the practice squad — Boston Scott, Greg Ward and Joshua Perkins.

Wentz also tossed a game-tying 5-yard TD to Zach Ertz and the winning 2-yard TD pass to Ertz in overtime.

"I think this would have to be his No. 1 game, quite honestly," coach Doug Pederson said Tuesday. "You could ask him later this week. But I just think from the standpoint of putting the team on his back, leading this team down the field, down two scores, to tie the game, and then of course to win it in overtime. Some of the plays that he did make, whether it was extending it with his legs or keeping a play alive and finding receivers down the field, and then his toughness to stand in the pocket and take some shots. I would say this would be his No. 1 game in the four years. It's really kind of exciting for him. I think it gives him confidence moving forward."

The offense is depleted, especially at wide receiver missing its three top guys. The Eagles released Mack Hollins last week. Jordan Matthews returned for his third stint with the team but was cut after two games. It's possible he could be asked to return. The team has wideouts Robert Davis, Marcus Green and Marken Michel on the practice squad.

Scott had 59 yards rushing on 10 carries, including a 2-yard TD run. He also caught six passes for 69 yards. The 5-foot-6 Scott was signed off New Orleans' practice squad late last season and played for the Eagles down the stretch. He began this season on Philadelphia's practice squad and was promoted Oct. 11. Injuries to Jordan Howard, Darren Sproles and Corey Clement gave him an opportunity to play with Miles Sanders. He made the most of it against the Giants.

Cornerback Ronald Darby got beat by Darius Slayton for TD passes of 55 and 35 yards. He missed a tackle on the shorter one that would've forced the Giants to kick a field goal. Darby struggled against DeVante Parker in a 37-31 loss at Miami last week.

Right tackle Lane Johnson is week to week with a high ankle sprain. Jeffery's foot injury is "significant." Running back Jordan Howard has missed the past four games with a stinger and remains day to day.

42:51 — The Eagles dominated time of possession but still needed overtime to beat the Giants because of the two big plays allowed on defense.

The Eagles visit the Redskins (3-10) on Sunday. They beat Washington 32-27 in Week 1. Jackson had eight catches for 154 yards and two TDs of 50-plus yards. That was the last time the Eagles had a healthy starting lineup.