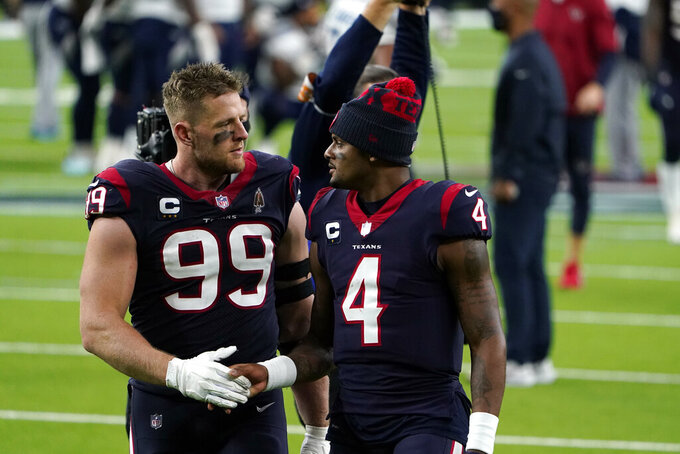 HOUSTON (AP) — Nick Caserio's introductory news conference as the Houston Texans' general manager was dominated by questions about whether Deshaun Watson wants out.

Caserio, a longtime executive with the New England Patriots, was hired on Thursday to replace Bill O’Brien, who served as both coach and general manager until he was fired after this season’s 0-4 start.

The first question Caserio fielded from reporters on Friday was what he thought about reports that Watson — the franchise quarterback and one of the only bright spots in a dismal 4-12 season — is unhappy with the direction of the team and wants to be traded.

“He’s our quarterback, and again, once we have an opportunity, spend some time together, we’ll have further discussions,” Caserio said. “I can’t tell you how much respect and administration that I have for him, for who he is as a player and what he means to this franchise.”

It was then that team owner Cal McNair jumped in to discuss Watson’s future. After welcoming Caserio to Houston, McNair talked about Watson and fellow disgruntled star J.J. Watt, who has been noncommittal when asked if he wants to stay.

“In regards to 4 (Watson) and 99 (Watt), they’re valued members on our team,” McNair said. “They’re important to the team and the city. They’re passionate and they want to win, and those are all totally in alignment with where we’re going and what we’ve done here in bringing Nick aboard. So, it’s perfect. We’re totally aligned.”

Watson was named to his third straight Pro Bowl this season and set franchise records by throwing for an NFL-leading 4,823 yards with 33 touchdowns.

McNair denied report from ESPN and NFL Network that he didn’t take Watson’s opinion into consideration before hiring Caserio.

“I’ve come to understand that it’s been reported that Deshaun feels left out of the process, but he and I had several visits and I understood his point of view before meeting with candidates,” McNair said. “I’ve reached out to Deshaun about Nick’s hire and I look forward to him getting back to me when he returns (from vacation).”

Another hot topic for Caserio on Friday was the role of another former Patriots employee, Jack Easterby, Houston’s executive vice president of football operations. Some have questioned whether the Texans gave Easterby, a former chaplain in New England, too much power in the wake of O’Brien’s firing.

Caserio said he has a close relationship with Easterby, before making it clear that Easterby won't make decisions about the roster.

“Any personnel decisions that will be made we’ll make as a group, but ultimately that’s a responsibility that Cal has instilled in me, is to handle the personnel side of the football operations,” Caserio said. “So that’s the expectation moving forward. Jack will have a role and we’ll work in conjunction with each other on a number of things for sure. But as it pertains to football decisions, those will ultimately be my decision in conjunction with the head coach.”

Houston’s next big move is to hire a coach. The Texans have interviewed former NFL coaches Jim Caldwell and Marvin Lewis. But they have not requested an interview with Kansas City offensive coordinator and hot coaching candidate Eric Bieniemy, which is reportedly one of the reasons for Watson’s unhappiness.

McNair also took time to address the perception that the young Texans franchise lacks an identity and has tried too hard to emulate the Patriots. It’s a criticism that has come up more frequently as fans began to question the decisions of O’Brien, a former New England assistant. His trade of superstar receiver DeAndre Hopkins in March was almost universally panned, leading some to call for his firing even before the team’s terrible start.

“We thank the New England Patriots, specifically Robert and Jonathan Kraft and coach (Bill) Belichick, for being a first-class organization that builds winners,” McNair said. “With respect to their organization, we do not consider ourselves the Patriots South. We are here to lead this team the Texans way.”

The question is: What, exactly, is the Texans way? The day after Houston’s season ended with a loss to the Titans, Watson called for a “whole culture shift” in the organization and said the team needed discipline.

Caserio is less interested in what’s happened with the team in the past than how to change things moving forward.

“It’s going to take a lot of work, hard work, being selfless,” he said.

And while McNair doesn’t want to be too closely tied to the Patriots, he is banking on a man who spent the last two decades with them to revamp his sagging franchise.

“It’s a great day to be a Texan because this is a big break,” McNair said. “This guy sitting next to me, Nick Caserio, has extreme competency, and we’ll work together, we’ll cooperate, we’ll collaborate ... and that will get us the fastest to where we want to get to.”