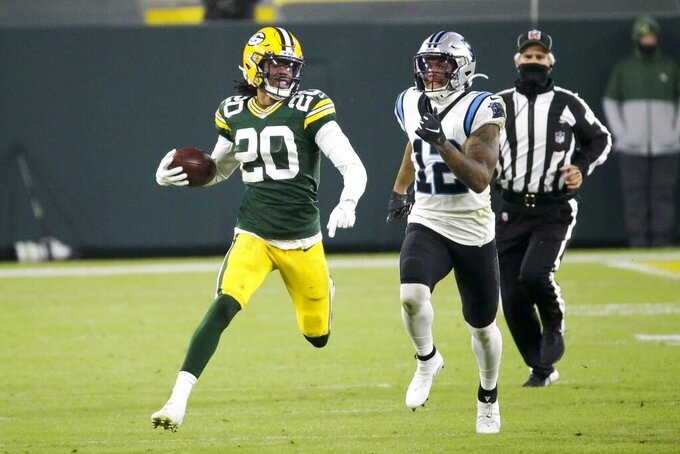 FILE - Green Bay Packers' Kevin King runs back a fumble in front of Carolina Panthers' D.J. Moore during the first half of an NFL football game in Green Bay, Wisc., in this Saturday, Dec. 19, 2020, file photo. King is staying with the Green Bay Packers after agreeing to a one-year deal worth $6 million. King’s agent, Chad Speck, confirmed the agreement on Tuesday, Mar\ch 23, 2021. (AP Photo/Mike Roemer, File)

Cornerback Kevin King is staying with the Green Bay Packers after agreeing to a one-year deal worth $6 million.

The move enables the Packers to keep both their starting cornerbacks from last season with Pro Bowl selection Jaire Alexander entrenched at the other spot.

King, who turns 26 on May 5, has made 36 starts in his four-year career and 25 over the last two seasons. The Packers drafted him in the second round with the 33rd overall pick in 2017.

He had a tough performance in the Packers' 31-26 NFC championship game loss to Tampa Bay. King appeared to have pass coverage on two of Tampa Bay's touchdowns, including Scotty Miller's 39-yarder with 1 second left in the first half. King also was called for a pass interference penalty late in the fourth quarter that helped the Bucs run out the clock.

But he’s been a pretty steady contributor to the Packers’ secondary since coming to Green Bay. The Packers would have been facing a notable lack of cornerback depth beyond Alexander if they had let King depart.

King made 57 tackles and started all 11 regular-season games in which he appeared last season, though he missed five games with a quadriceps injury. He had no interceptions last year but picked off five passes in 2019.

King’s decision means the Packers will be keeping two of their major free agents from departing. Just before the free agency period started, the Packers reached an agreement with Pro Bowl running back Aaron Jones on a four-year, $48 million deal that includes a $13 million signing bonus.

Neither deal has been officially announced.

The Packers lost All-Pro center Corey Linsley, who joined the Los Angeles Chargers on a five-year deal worth an average of $12.5 million per season. The move reunites him with offensive tackle Bryan Bulaga, who left the Packers for the Chargers via free agency a year ago.