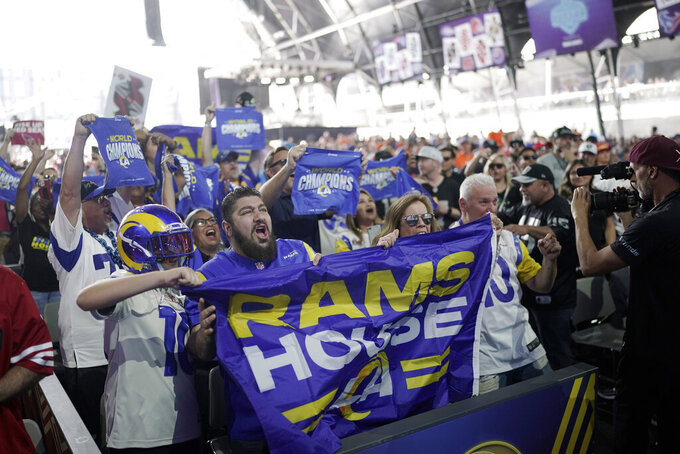 LOS ANGELES (AP) — The Super Bowl champion Los Angeles Rams showed up fashionably late to the NFL draft on Friday night to make their first pick, grabbing Wisconsin offensive lineman Logan Bruss at the back of the third round.

The Rams used the 104th overall selection to get Bruss, a hulking lineman who played mostly right tackle for the Badgers.

Coach Sean McVay said Bruss is a candidate to start at right guard immediately for the champs after the departure of Austin Corbett to Carolina in free agency.

“Honestly, this is the place I was kind of dreaming of coming to play,” Bruss said. “For this to happen is a dream come true, and I’m really excited especially to see some familiar faces there.”

Bruss said Edwards showed him the ropes in his first season in Madison, and it's remarkable to think he'll be doing the same in Los Angeles. Bruss already came out to California during the draft process to work out with Havenstein and Edwards.

“It was something they said might happen, and for that to happen is obviously crazy, and I'm really excited about it,” Bruss said.

Bruss will compete with Coleman Shelton, Bobby Evans and Tremayne Anchrum for the only vacant starting spot on the offensive line that has been a key to McVay's offensive successes. Left tackle Andrew Whitworth retired after the Super Bowl, but the Rams re-signed four-year backup Joseph Noteboom to take Whitworth's spot permanently.

“It's always a little bit easier evaluation when you get these Wisconsin linemen, because there's so many nuances to what they do in the run game, protections,” McVay said. “With the background with Rob and Dave, you feel really comfortable with that, and then when you talk to those guys about him, they can't say enough good things.”

McVay and general manager Les Snead got calls about trading down, but the Rams kept their pick because they had a metaphorical “gold star” next to Bruss' name as a player they wouldn't pass up, according to Snead.

The organization made the pick from its draft headquarters in a mansion in the Hollywood Hills — and they used the palatial setting to make it clear how much they valued Bruss. Midwest area scout Brian Hill jumped into the mansion’s pool with his clothes on after the pick, apparently because he had incorrectly predicted Bruss wouldn’t be available to the Rams.

“I’m glad I could make that happen,” Bruss said with a laugh.

After trading away their first three selections to secure the veteran talent that won the title, the Rams were the last team to make a pick in the three-day draft.

They finally got in the game by using the compensatory pick — the 40th selection in the third round — given to them for losing executive Brad Holmes to Detroit.

The Rams didn't make a first-round pick for the sixth consecutive season after trading their 2022 choice — and their 2023 selection — to Detroit for Matthew Stafford, who promptly led them to a championship. Los Angeles also dealt its second-round and third-round selections to Denver for its half-season rental of Von Miller, who played a major role in the title run.

The Rams will be busier Saturday with seven picks in the final four rounds. Snead has a solid track record of finding important contributors at the back of the draft, and he'll have to be sharp again with several departed contributors from the title team.

Snead has acknowledged he'll be looking for defensive backs to bolster his depleted group, along with edge rushers to join one of the NFL's top pass rushes alongside Leonard Floyd and Aaron Donald.