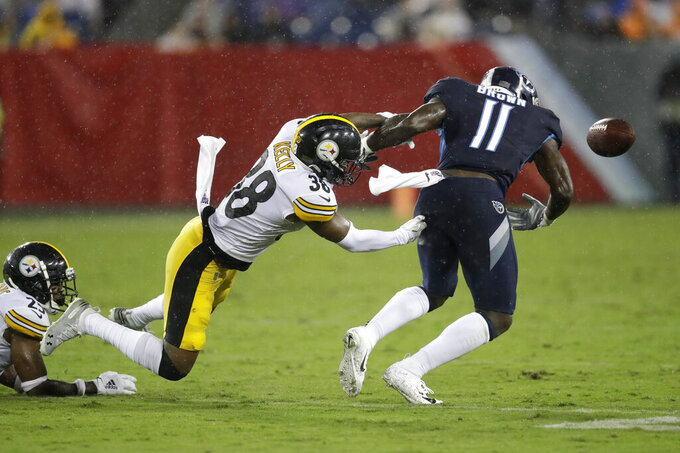 PITTSBURGH (AP) — Pressure is relative. So forgive Kameron Kelly if the Pittsburgh Steelers safety isn't getting caught up on whether he'll still have a job in the NFL once teams pare the rosters from 90 to 53 on Saturday afternoon.

"I just ball," Kelly said Tuesday. "These are all my brothers. I don't want any of us to get cut."

The reality of playing professional football for a living, however, won't allow it. Brotherhood aside, Kelly is well aware of the cutthroat nature of the business. He lived it last spring while playing for the San Diego Fleet of the Alliance of American Football.

One afternoon, Kelly was in a meeting with his Fleet teammates when he stepped outside during a quick break and opened up Twitter on his phone. The news wasn't good. The fledgling league was broke. He was out of a job. So was everyone else in the building.

So Kelly bailed. Immediately. Not even bothering to take any of the modest swag the players were given. Called his mom, his dad and his agent then went back to his hotel room and slept.

When he woke up, he headed to Mexico for a three-day vacation wondering if any realistic shot at reaching the NFL was over. Now that's pressure. Wondering if he's going to stick with the Steelers — an opportunity he wasn't sure would materialize when the AAF went belly-up — not so much.

Besides, Kelly probably doesn't need to be concerned. He's done so well while playing both safety spots in addition to carving out a role in nickel and dime packages he's almost certain to survive cut day. Not that he wants to talk about it.

"I don't ever want to think I have it on lock," Kelly said. "I always want to play with that chip on my shoulder because I feel like that chip is what helped me elevate my game. So that chip is going nowhere."

Maybe, but three dozen of the men Kelly will share the field with on Thursday night will be. While stars like Steelers quarterback Ben Roethlisberger and cornerback Joe Haden can turn their attention to the season opener at New England on Sept. 8, the majority of players who will see extended playing time against Carolina will be hoping to make a compelling argument for gainful employment, whether it's in Pittsburgh or elsewhere.

Linebacker Tuzar Skipper's stat line during the preseason is impressive: three sacks in three games. Yet there's also another number he's concerned about: zero. That's the number of snaps on special teams he's taken. For a guy trying to lock down the 52nd or 53rd roster spot by showing how versatile he can be, that's not great.

Asked what he feels he needs to show the coaching staff, Skipper — an undrafted rookie who attended an open tryout for the CFL's Hamilton Tiger-Cats in the spring before eventually making his way to Pittsburgh — didn't hesitate.

"Play special teams," he said with a laugh before pointing out he was a "War Daddy" on kickoff coverage while playing collegiately at Toledo.

Still, Skipper is optimistic. He believes he's done enough to earn a look elsewhere if Pittsburgh doesn't work out. He'd prefer, however, not to have to pack up and move. The trip to Carolina offers an opportunity to put more things on tape, things besides just getting to the quarterback.

At 24, Skipper has the luxury of time. At 27, Diontae Spencer might not. The 5-foot-8 wide receiver/kick returner spent four years in the CFL, setting career highs in receptions (81), yards receiving (1,007) and touchdowns (seven) last summer while playing for the Ottawa Redblacks.

He could have chosen to stay in the CFL, which offers job security if nothing else. Yet he promised himself he'd give the NFL another shot even if he knew the odds weren't great. He hasn't disappointed. He's caught two passes for 15 yards, turned a pair of reverses into 48 yards rushing, averaged a healthy 14.7 yards per punt return and his 35-yard kickoff return is the team's longest of the preseason.

The numbers game, however, could make it tough for him to stick. To keep Spencer, the Steelers might have to cut Eli Rogers, Ryan Switzer or third-round pick Diontae Johnson. Switzer is a veteran who's earned Roethlisberger's trust. Rogers is more familiar with the system and Johnson was the 66th overall pick in the draft.

"At the end of the day, no matter what happens, I can always look back and say I tried it and if I didn't try it, I feel like I would have a huge burden on me saying, 'What if?' and I didn't want to have that in my head," Spencer said. "I feel like no matter what it was the best opportunity for me."