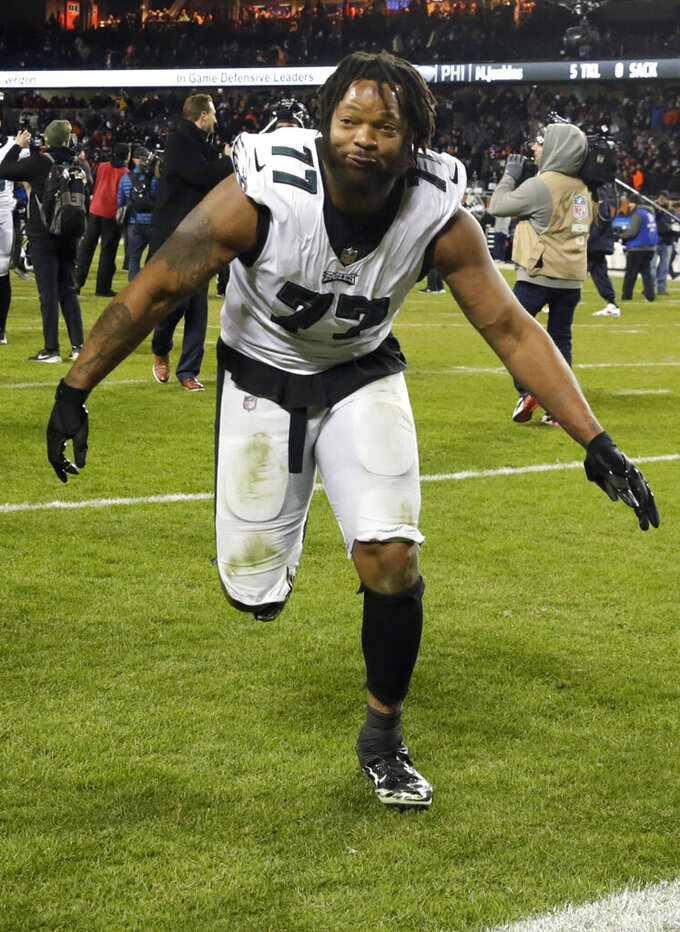 FILE - In this Jan. 6, 2019, file photo, Philadelphia Eagles defensive end Michael Bennett (77) celebrates after an NFL wild-card playoff football game in Chicago. Prosecutors in Texas are dismissing a felony charge against NFL defensive end Michael Bennett, who was accused of pushing the arm of a paraplegic security guard while trying to get onto the field after the 2017 Super Bowl in Houston. The Harris County district attorney's office announced the decision Wednesday, April 3, 2019.(AP Photo/David Banks, File)

HOUSTON (AP) — Prosecutors in Texas said Wednesday they are dismissing a felony charge against NFL defensive end Michael Bennett, who was accused of pushing the arm of a paraplegic security guard while trying to get onto the field after the 2017 Super Bowl in Houston.

Bennett, recently traded to the New England Patriots, was indicted by a grand jury in March 2018 on a count of injury to the elderly. The Harris County district attorney's office said the decision to dismiss came after an extensive review that included looking at video.

"We dismissed this case in the interest of justice," she said.

Bennett, now 33, was a spectator at the 2017 game and a member of the Philadelphia Eagles when he tried to get onto the field after the Patriots' victory to see his brother, Martellus Bennett, a tight end for New England at the time.

Prosecutors said a security guard who used a wheelchair said Michael Bennett pushed her arm as he made his way through the crowd. The woman was 66 at the time.

Bennett's attorney, Rusty Hardin, called the incident "a total misunderstanding" and said that whatever happened to the woman was "not done by Michael."

"There were numerous relatives of New England players who were authorized to be down on the field after the game that went through a door this lady was guarding," Hardin said. "And whatever happened to her, whatever type of event occurred, it was not done by Michael and this dismissal confirms that."

The charge carried a penalty of up to 10 years in prison and a $10,000 fine. The Houston police chief has said a detective did not actively start working the case until September 2017 because the police department had prioritized more serious cases.

Among evidence reviewed in the case was surveillance footage a prosecutor had preserved from investigating the theft of Patriots' quarterback Tom Brady's jersey from the locker room after the game.