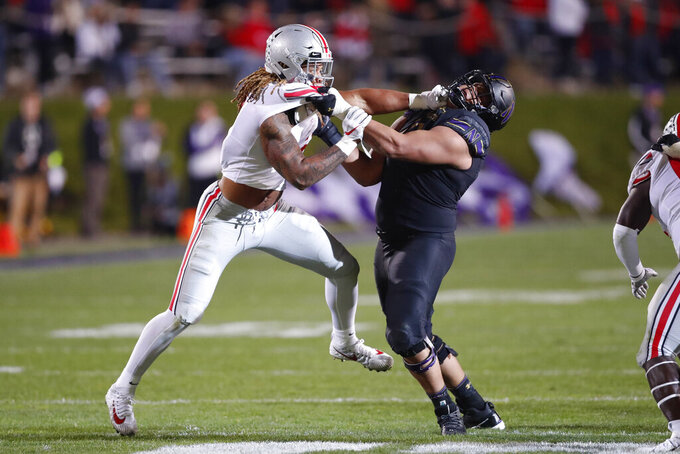 COSTA MESA, Calif. (AP) — Rashawn Slater already looks like a good fit for the Los Angeles Chargers. Not only does he fill a need for a starting offensive left tackle, but he showed up for Thursday's first round of the NFL draft in Cleveland wearing a powder blue suit.

Powder blue is not only Slater's favorite color but it is also happens to be the primary color for the Chargers.

“I felt pretty good about them. I hadn't talked to the Chargers on Zoom, at least not the coaches, so I was a little bit surprised from that standpoint," said Slater, who was taken with the 13th overall pick. "At the same time, I saw the mock drafts. I try not to pay attention to them, but I knew it could be a possibility."

Slater became the first Northwestern player to go in the top 15 since Denver took Chris Hinton fourth in 1983. The last Wildcat to go in the first round was defensive tackle Luis Castillo in 2005, who coincidentally was taken by the Chargers.

Slater is projected as the starting left tackle going into training camp over Trey Pipkins and Storm Norton. He is the first of nine selections by the Chargers, who have three picks on Friday, including two in the third round.

“I couldn’t have picked a better place for myself. Great young quarterback, young team and we’re going to have so many weapons,” Slater said.

Slater started all 37 games during his collegiate career (2017-19). He opted out last season due to COVID-19 concerns. According to Pro Football Focus, Slater allowed only two sacks, two quarterback hits and 19 pressures in 2018 and ’19.

Slater's performance against Ohio State's Chase Young in 2019 — where he held the All-American defensive end without a sack — ended up being the defining game of his career.

General manager Tom Telesco said once Slater wasn't selected by Detroit at No. 8, he felt good about the Chargers' chances of getting him.

“He is a very athletic tackle and fits the scheme we’re going to run extremely well. He's also a pretty balanced player,” Telesco said. “Everyone concentrates on the passing game but he's a very good run blocker. He can cut off defensive ends, he can reach people and get to the second level, which is the linebackers, with really good speed and angles. He can excel in both areas.”

The Chargers' selection of Slater continues a massive revamp of their offensive line. After a season during which rookie Justin Herbert came under constant pressure, the Chargers signed three linemen during free agency — center Corey Linsley and guards Matt Feiler and Oday Aboushi.

Right tackle Bryan Bulaga is the only returning starter, but he battled injuries for most of the season. He missed six games and left three others in the first quarter.

“We are very encouraged with what we have done because that was our number one goal going into free agency and the draft. I want to control the line of scrimmage,” coach Brandon Staley said.

Slater is the first offensive tackle to be taken by the Chargers in the first round since D.J. Fluker went 11th overall in 2013. It is the second straight year and fourth time in the past seven drafts that an offensive tackle has been selected with the 13th pick.

He also comes from an athletic family. Slater’s father, Reggie, spent eight seasons in the NBA playing for the Denver Nuggets, Toronto Raptors and Minnesota Timberwolves.