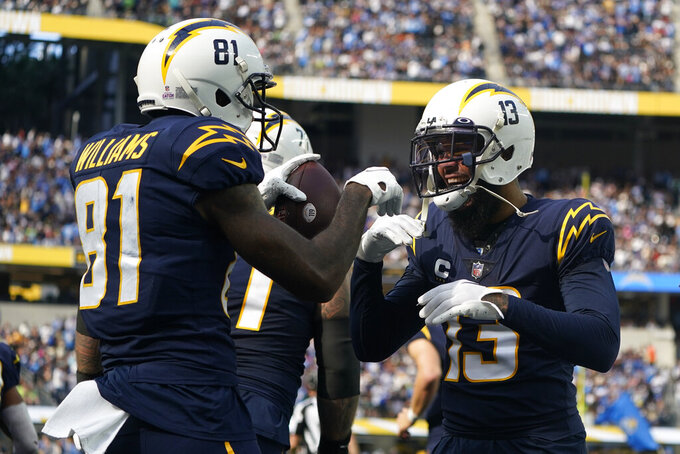 Keenan Allen and Mike Williams were full participants in Friday's practice. Even though they are both listed as questionable on the injury report and coach Brandon Staley said it will come down to a game-time decision, both players said they were ready to go.

Allen has missed seven games, including the past two, with a nagging left hamstring injury he suffered during the Sept. 11 opener against Las Vegas. Williams has been sidelined the last two games after suffering a high sprain to his right ankle during the fourth quarter against Seattle on Oct. 23.

“I'm confident. I was able to run more routes and feel comfortable," Allen said. “Communication is the biggest thing. As long as we're on the same page, it should be fun.”

Allen has been on the field for only 44 plays this season. He has six receptions for 77 yards after five straight years with at least 95 catches.

Williams leads the Chargers in receiving yards (495) and is tied for second in receptions with 37. He has six touchdowns in 10 meetings against the Chiefs, including four in the past three.

Williams also has a knack of coming up with big plays in prime-time games. He had the go-ahead, 53-yard touchdown catch late in the fourth quarter in a Sunday night game last year against Pittsburgh.

“So it sounds pretty good,” Williams said when asked about his success against the Chiefs and in prime time. “I'm looking forward to it.”

Herbert and the offense have been limited without Allen and Williams. Herbert is averaging 6.3 yards per attempt, tied for fifth-lowest in the league. Over the past five games, it has been only 5.5 yards. His 8.4 yards per completion is second-lowest during the same span.

Despite not throwing for 300 yards in five straight games, the longest drought of his three-year career, Herbert has been patient while trying to lead an offense with limited weapons.

Even with the injuries, the Chargers go into Sunday night's game with a 5-4 record and still in playoff contention.

"It has certainly been a learning experience. Having to deal with those injuries, you have to grow from that and get better. If you don’t get better, that’s kind of when you fall off. You know, we’re exactly where we need to be.”