Chargers and Ravens meet in matchup of division leaders 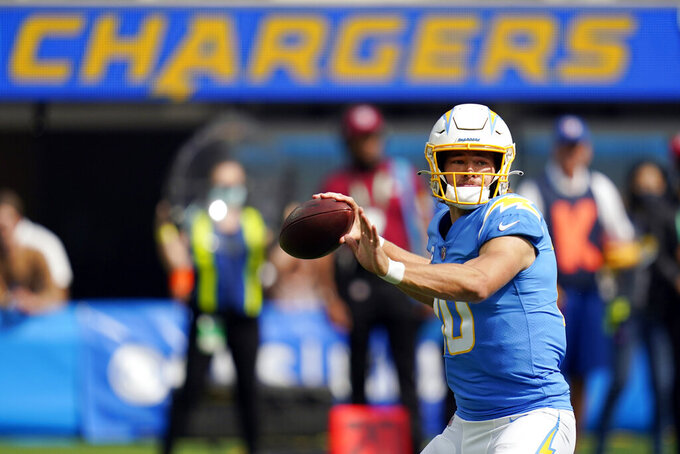 OWINGS MILLS, Md. (AP) — Baltimore coach John Harbaugh was asked recently to rank the pulsating finishes these past few weeks that have put his team atop the AFC North.

“The next one is going to be the best one,” Harbaugh said with a laugh.

The Ravens might very well be headed to another stressful fourth quarter, because up next for them Sunday is a clash with the Los Angeles Chargers. This matchup pits two of the most exciting quarterbacks in the sport in Lamar Jackson and Justin Herbert. It's also a game between teams that have been tested in close contests — and have come through often enough to lead their divisions.

Baltimore (4-1) lost its first game of the season in overtime, then beat Kansas City with the help of a late fumble and edged Detroit on Justin Tucker's 66-yard field goal. The Ravens rallied from a 19-point deficit Monday night to beat Indianapolis in OT.

Herbert threw for 398 yards and four touchdowns against Cleveland. Jackson's stat line against the Colts was similar: 442 yards passing and four TDs. Neither quarterback was intercepted.

Jackson is passing more this year, and the Ravens lead the NFL in total offense. He's still a running threat as well.

“He’s probably the most dynamic player in the NFL when he gets the ball in his hands," Chargers linebacker Joey Bosa said. “At the end of the day, that’s what we’re going to need to stop.”

Harbaugh has plenty of admiration for Herbert as well.

“He throws the second-fastest football in the National Football League based on what I saw in the data. So, he has tremendous arm strength,” Harbaugh said. “I’ve never seen him throw in person yet. This will be a first for me, personally. I’m looking forward to it.

Austin Ekeler is tied for the league lead with seven touchdowns and helped fuel the Chargers' rally last week against Cleveland with three touchdowns in the fourth quarter.

“What you can do is activate him in the passing game and in the running game to give you an advantage depending on how people are playing you,” coach Brandon Staley said. “Against a rush that’s that good, you have to find your backs for some breathers back there when the pocket’s chaos.”

Ekeler, who is fifth in the AFC with 349 yards rushing, hasn’t been stopped for negative yards or no gain in his last 37 carries.

The Ravens lost receiver Sammy Watkins during the game against Indianapolis to a hamstring injury. That meant tight end Mark Andrews and receiver Marquise Brown were clearly the top options for Jackson to look for. Those two combined for 21 catches, 272 yards and all four Baltimore TDs.

The Chargers come into Sunday’s game last in the league in run defense, giving up 157.6 yards per game.

"We have a high level of missed tackles with the yards after contact," Harris said. "That’s something we need to clean up.”

The Ravens, who lost running backs J.K. Dobbins and Gus Edwards to injuries before the season, were held under 100 yards rushing by the Colts — the first time in 44 games Baltimore failed to reach triple digits.

“I feel like – we feel like – this guy’s a good player," Staley said. "We have to keep coaching him, stay patient with him. Because sometimes it’s what guys like this need, patience, and a little bit more experience.”

The Ravens benefitted from mistakes by Indianapolis' kicking game Monday. The Colts missed an extra point, as well as a field goal that would have won the game. Baltimore also blocked a field goal.

Baltimore returns to a more normal schedule now after playing three of its first five games at night.

“We're really excited about it, actually, to get in that 1 o'clock rhythm,” defensive coordinator Don Martindale said. “I don't know how you all felt on Tuesday, but I know how I felt. And Wednesday.”