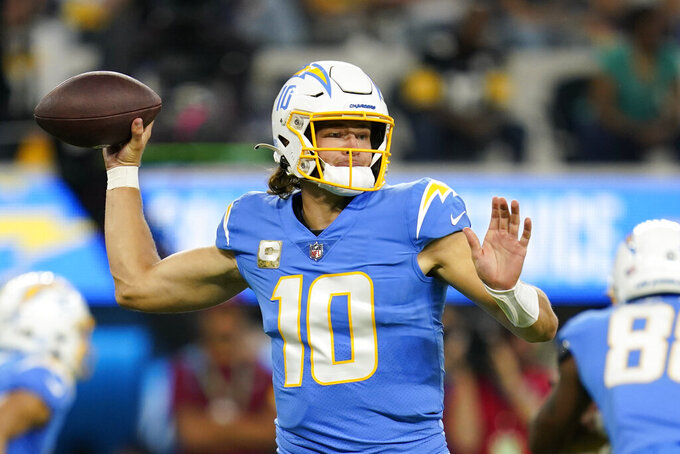 Los Angeles Chargers quarterback Justin Herbert throws a pass during the first half of an NFL football game against the Pittsburgh Steelers, Sunday, Nov. 21, 2021, in Inglewood, Calif. (AP Photo/Ashley Landis)

Brandon Staley has preached from the time he was hired as the Los Angeles Chargers coach in January that his team needed to thrive in the fourth quarter instead of collapsing.

So far, the Chargers are delivering.

Sunday night's 41-37 victory over the Pittsburgh Steelers was their fifth fourth-quarter comeback this season and improved their record to 5-3 in one-score games. Los Angeles was 40-63 since 2010 coming into the season in games decided by eight points or fewer.

“The games against the best competition come down to the end,” Staley said. “When you've got to have it and you feel like you are ready for it, then I think you can thrive and execute better.”

The Chargers have scored 94 points in the final 15 minutes, which is fourth in the league. They are also one of five teams with three or more touchdowns in the final two minutes of games.

Staley was proud of his team's resolve despite allowing 27 points in the fourth quarter, including 17 where the Steelers took over in Chargers territory.

Justin Herbert was also able to weather a fourth-quarter interception and connected with Mike Williams for the go-ahead TD.

“My coaches are like ‘you gotta love it’ where I am thinking why we can't just have a relaxing fourth quarter one of these days so I don't age 10 years every Sunday? I don’t think it’s gonna change," linebacker Joey Bosa said.

Perhaps more important for the Chargers is that the win gives them a good start in what is a crucial three-week stretch where they face contenders for AFC playoff spots. The next two against Denver (5-5) and Cincinnati (6-4) are on the road.

Los Angeles (6-4) is a half game behind Kansas City (7-4). But the Chargers could move into a tie atop the AFC West with a victory over the Broncos.

Austin Ekeler scored a career-high four touchdowns and had his sixth 100-yard scrimmage game this season with 65 yards rushing and 50 yards receiving. The fifth-year running back is only the second player in team history to score a TD from scrimmage in each quarter during a game. He also already has a career high for rushing yards in a season with 573 while averaging 4.7 yards per carry.

Third-down defense continues to be an issue. Pittsburgh was 8 of 15 on third downs, the fifth game this season opponents have converted more than half of their opportunities. Los Angeles has the second worst third down defensive rate in the league.

Williams returned to the form he showed the first five weeks with five receptions for 97 yards, including the go-ahead touchdown where he took advantage of being left open when Pittsburgh was bringing a blitz and went 53 yards. Williams needs four receptions to surpass his career high of 49 set in 2019.

Ty Long has had a league-leading three punts blocked since the start of last season. The latest came against the Steelers as rookie upbacks Nick Niemann and Larry Rountree were unable to stop pressure up the middle, which resulted in Miles Killebrew getting his second block of the season.

698 — Receptions by Keenan Allen. Allen has three straight games with eight or more catches for the fourth time in his career and is third in the league with 74 receptions.

The Chargers return to division play for the first time since Week 4 when they travel to Denver. Los Angeles has won five consecutive AFC West games after dropping nine straight.