Chargers' defense gets momentum with second half vs Falcons 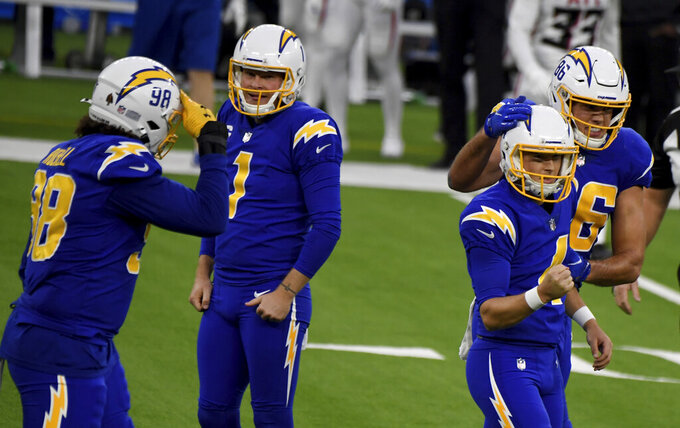 COSTA MESA, Calif. (AP) — The Los Angeles Chargers' defense has had two major deficiencies this season: generating turnovers and stopping opponents during the second half.

They were able to do both in Sunday's 20-17 win over the Atlanta Falcons, which could provide some momentum for the remaining three games.

The Chargers intercepted Matt Ryan three times and held Atlanta scoreless after halftime. The three picks were the most they have had since five INTs against Buffalo in 2017. It also was the first time in 25 games an opponent hasn't scored in the second half, and only the fifth time in Gus Bradley's four seasons as defensive coordinator.

Los Angeles came into the game with only six interceptions, which was fifth fewest in the league. The picks on Sunday by Rayshawn Jenkins, Jahleel Addae and Michael Davis led to the Chargers' final 10 points.

“I was kind of excited to have the game on our shoulders and it kind of played out how I expected it,” defensive end Joey Bosa said. “We’ve had trouble taking the ball away this season, but we showed what can happen when you can do that. The game ball definitely went to the secondary."

The Chargers (4-9) were the only team to give up points on more than half of their second-half drives (32 of 62), but held firm on four series despite the Falcons reaching LA territory on all four.

The momentum comes at a good time for the Chargers, who have a short week to prepare for Thursday's game at Las Vegas. It also begins a run of three straight AFC West games to end the season.

Lynn coaching special teams. The much-maligned unit has struggled all season and bounced back from a horrendous outing against New England with contributions from the kicking game and return units. Nasir Adderley's 76-yard kickoff return during the second quarter helped set up Michael Badgley's first field goal. Badgley then split the uprights from 43 yards on the final play for the second winning kick of his three-year career.

Lynn reassigned coordinator George Stewart on Nov. 25 but took over last week after admitting he had too many people overseeing the unit in the two games following the change.

Play calling in the final minute with no timeouts. For the second time in three weeks, the Chargers called a running play without any timeouts and appeared disorganized. On third-and-1 from the Falcons 8 and 22 seconds remaining in the first half, Kalen Ballage was stopped for no gain. The field goal unit was slow getting on the field as the offense was slow getting the call, causing time to expire without any points.

The Chargers have run the ball 23 times on third-and-1 this season and have been held for no gain or negative yards seven times. The seven stuffs are tied for second most in the league.

Austin Ekeler had his best game since returning from a hamstring injury. The fourth-year running back had 146 scrimmage yards, which is his second-highest total this season. Ekeler had 79 yards rushing on 15 carries along with nine receptions for 67 yards.

Adderley continues to struggle in coverage. He had two missed tackles, including one on which Atlanta's Laquon Treadwell went right through him en route to a 9-yard touchdown during the second quarter.

Los Angeles could be without three key offensive starters. Right guard Trea Turner and right tackle Bryan Bulaga are in concussion protocol, while wide receiver Mike Williams left after Sunday's first series due to back issues.

25 — Touchdown passes for Justin Herbert, making him the fourth rookie QB in NFL history with 25 or more. Cleveland's Baker Mayfield has the record with 27 in 2018.

The Chargers have dropped nine straight division games, including their past three to the Raiders.