Chargers defense a no-show in playoff loss to Patriots 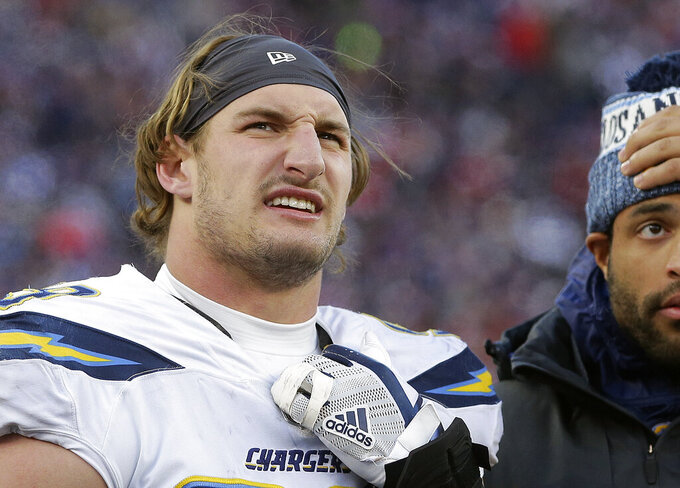 FOXBOROUGH, Mass. (AP) — With a few minutes left in the first half, on their fifth attempt to slow down Tom Brady and the New England Patriots, the Chargers finally managed a defensive stop.

It was only temporary.

Desmond King fumbled New England's first punt of the game, Albert McClellan recovered the ball just inches before it went out of bounds , and the Los Angeles defense was back on duty. The Patriots needed just four more plays to score their fifth touchdown in one of the most dominating starts in NFL postseason history.

"We laid an egg today," Chargers safety Adrian Phillips said after the Patriots scoredfourstraighttouchdowns to blow open the game and went on to win 41-28. "We didn't show up the way we usually do."

One week after shutting down Lamar Jackson and the Baltimore Ravens in the wild-card round, the Chargers (13-5) fell behind 35-7 in the first half and blew an opportunity to advance to their first AFC championship game since the 2007 season.

Instead, the Patriots (12-5) reached the conference title game for the eighth straight time, with a chance to reach the Super Bowl for the third year in a row and the ninth time under Brady and coach Bill Belichick.

"They've been here before and they showed up today," Chargers coach Anthony Lynn said. "We dug ourselves in a hole in the first half, but the guys came back out in the second half and competed hard. It was a little too late."

The Patriots are the second team in league history to score a touchdown on each of the first four drives of a playoff game, joining the 2000 Indianapolis Colts (in a first-round game against Denver).

Quarterback Philip Rivers said he was pleased with the way the Chargers offense helped out the defense and came right back to tie it 7-all after New England scored on its opening drive.

"All year, we've really complemented each other well. And if one side needed picking up a little bit, we've done that," Rivers said.

The only other time the Patriots failed to score in the first half was on their last possession, when they took over with 51 seconds left and moved to the Los Angeles 36. And it was only because Phillip Dorsett was stopped inbounds and the clock ran out that they weren't able to attempt a field goal.

New England's Ryan Allen did not punt again until there were under 10 minutes left in the game.

"We played better on defense in the second half, but it was too late," safety Derwin James said. "Once Brady has a lead on you like that, it's tough."

The Chargers lost on the road for just the second time all season, and this one wasn't even close. Before heading into the locker rooms at the half trailing 35-7, they:

—Had six first downs to 24 for New England.

—Allowed the Patriots to convert all five times they were in the red zone and on five of six third downs.

"We got our butt's kicked today," Lynn said. "It's not a comfortable moment for us, for sure, but I think in these times we can learn a lot about ourselves."

Rivers completed 25 of 51 passes for 331 yards in the game — much of it after it was out of reach. Tyrell Williams caught five passes for 94 yards, Melvin Gordon had a rushing touchdown and Antonio Gates had a TD reception in what could be the last game of his career.

"Pretty cool that if it were to be his last one, that his last catch was a touchdown," Rivers said. "If it were to be, you'd look back one day and say it ended just how it started there a long time ago."