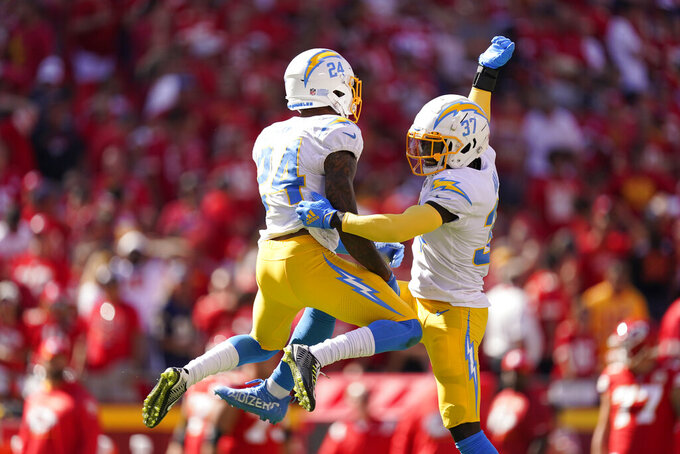 Justin Herbert has continued to earn the lion's share of attention for the Los Angeles Chargers during their 2-1 start. The defense also deserves its share of the credit as well.

The Chargers lead the league with 30 points off takeaways. Three of their four touchdowns in Sunday's 30-24 victory over the Kansas City Chiefs came off turnovers.

Los Angeles is tied for third with six takeaways. That is also its most in the first three games since 2016, which was also six.

The aggressive and multiple scheme employed by new coach Brandon Staley has helped improve an area where the Chargers have struggled in recent seasons. They set a team record in forcing only 14 turnovers in 2019 and their 19 last season was tied for ninth worst in the league.

“It wasn’t an accident. Those guys (in the secondary) were really making a point to punch at the ball and go after it. We came up with it four times,” edge rusher Joey Bosa said. “It was a testament to what we have been working on. We said we wanted four and we got four.”

The go-ahead touchdowns in both Chargers wins have been set up by a takeaway. On Sunday, Alohi Gilman's interception on a deep pass by Patrick Mahomes at the LA 41-yard line set up Herbert's 4-yard TD to Mike Williams with 32 seconds remaining.

In Week 1, Kyzir White forced a fumble deep in Washington's half of the field recovered by Kenneth Murray to set up another Williams score.

The young Chargers secondary, which is missing Chris Harris Jr., came up with all four turnovers in Kansas City. Rookie Asante Samuel Jr. picked off a pass for the second straight game, second-year safety Gilman got his first career interception, while Tevaughn Campbell forced a pair of fumbles that were recovered by Michael Davis.

“A turnover ain’t got no age on it. A turnover don’t matter how old you are. Whoever makes the play, it’s your time to make the play," safety Derwin James said. “We always say, ‘Why not me?’ We’re always stressing that to each other, that we got to get the ball more.”

The Chargers are over .500 through three games for the first time since 2014, but Staley has been quick to point out that plenty of corrections are in order — including fixing a leaky run defense — if the team is to remain in contention.

“There’s a lot in the film that we’re not going to like. Last week, I know it was the tough side of things, but we can’t have an illusion of what happened either, just because we won," Staley said. “There’s going to be just as many things that didn’t happen right that we have to tell the truth about. That’s where we can’t be confused.”

Williams is the first Chargers player since Antonio Gates in 2010 to have a touchdown reception in at least the first three games. Williams also has 11 receptions on passes either behind or within 5 yards of the line of scrimmage after having 12 last season.

The defense continues to struggle to get off the field on third downs. The Chiefs converted 6 of their 10 opportunities while opponents are 15 of 30 this season. The 50% conversion rate is fifth worst in the league.

Samuel Jr. is the first player in team history to have multiple interceptions before turning 22 years old and is the third Charger since the 1970 merger to have at least two in the first three games of his career.

Tristan Vizcaino was wide left on two extra-point attempts, including one with 32 seconds remaining that left the Chargers with only a six-point lead.

DE Justin Jones (calf) and Harris Jr. (shoulder) have missed the past two games, but could be available with the next game being on Monday night.

5 — games by Justin Herbert with at least three touchdown passes and no interceptions in his first two seasons. The others to accomplish that are Lamar Jackson (6), Dan Marino (6), Patrick Mahomes (5) and Dak Prescott (5).

The Chargers have another pivotal division game next Monday when they host the unbeaten Las Vegas Raiders. It is the first time they have hosted the Raiders on a Monday night since 1996. The teams split the two games last season with both coming down to the final play.