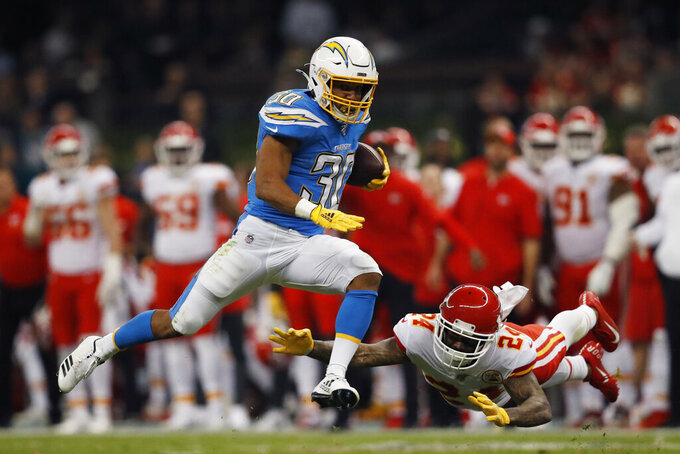 FILE - In this Nov. 18, 2019, file photo, Los Angeles Chargers running back Austin Ekeler, left, gets past Kansas City Chiefs strong safety Jordan Lucas, right, during the first half of an NFL football game in Mexico City. Ekeler’s breakout season with the Los Angeles Chargers has resulted in a contract extension. The running back has agreed to a four-year deal with the Chargers worth #24.5 million, including $15 million guaranteed. Ekeler was slated to be a restricted free agent when the new league year starts on March 18.(AP Photo/Eduardo Verdugo, File)

The running back has agreed to a four-year deal with the Chargers worth $24.5 million, including $15 million guaranteed. Ekeler was slated to become a restricted free agent when the new league year starts on March 18.

“It feels a little overwhelming, but it's a relief,” Ekeler said during a conference call Friday. “We were going back and forth for a month. We were pretty far apart at first but once we kept getting closer it started to become a real possibility.”

Ekeler went undrafted before signing with the Chargers in 2017. He went from being a special teams standout to a backfield threat over his three seasons. He was seventh in the league and fourth in the AFC this season with 1,550 scrimmage yards (557 rushing, 993 receiving). He also scored 11 touchdowns.

Among Ekeler's 2019 highlights were scoring the game-winning touchdown in overtime in the opener against Indianapolis and posting the NFL's 35th game with 100 yards rushing and receiving in Week 14 at Jacksonville. Ekeler had 213 scrimmage yards (112 receiving, 101 rushing) in just 12 touches, which is the fewest in a game in reaching that milestone.

Ekeler will have a big role in a Chargers offense undergoing many changes as they prepare to move into a new stadium at Hollywood Park. The franchise will have a new quarterback after announcing last month that it wouldn’t re-sign Philip Rivers after a disappointing 5-11 year. Los Angeles, which has the sixth pick in the draft, also has a pending trade with Carolina involving left tackle Russell Okung for guard Trai Turner.

“I can see myself being more of a leader vocally,” Ekeler said. “My role will be bigger than last year with more opportunities.”

Ekeler's extension also means that running back Melvin Gordon is unlikely to re-sign. Gordon held out through the first three weeks of last season and averaged only 3.8 yards per carry when he returned. Gordon is seeking a multi-year deal after recording over 1,200 scrimmage yards in three straight seasons from 2016 to ’18.

General manager Tom Telesco said during the scouting combine the he believes Ekeler can be the Chargers' lead guy, but that it would be ideal to pair him with another back. Justin Jackson has shown some flashes but has been plagued by injuries the past two seasons.

“He can handle the touches. Would you want to have him carry the ball 30, 35 times a game, which hardly anybody does anymore? I think we’d want to pair him with anybody," Telesco said of Ekeler. "He can do so much with the football with the amount of touches he gets. It doesn’t just have to be as a running back. We can put him in the slot. We can put him out wide. He’s a pretty dangerous player for us and a big part of our offense. He’s going to play a lot.”