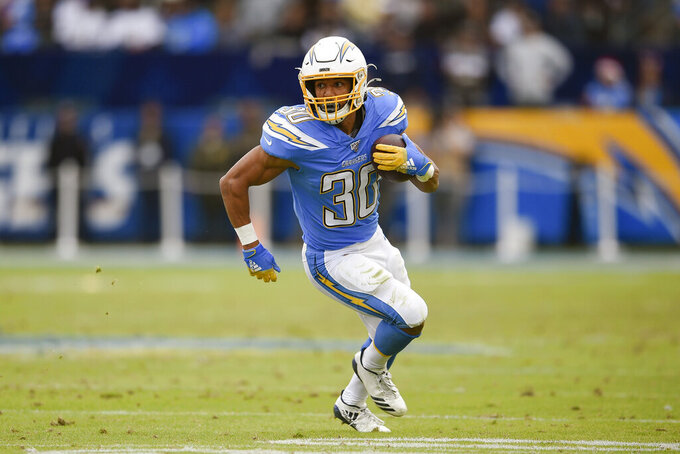 FILE - In this Dec. 22, 2019, file photo, Los Angeles Chargers running back Austin Ekeler runs against the Oakland Raiders during the second half of an NFL football game in Carson, Calif. Ekeler could be the one player who benefits the most from the Los Angeles Chargers changes on offense. (AP Photo/Kelvin Kuo, File)

However, the Los Angeles Chargers running back is still trying to maintain the same approach.

Ekeler is the Chargers lead back after a breakout 2019 season and Melvin Gordon's departure to Denver. Ekeler knows there is an increased spotlight on him this year, but he thinks that will be the only major difference.

“Now I am the starting running back but that doesn't mean my game is going to change,” he said on Monday. “There is more of a spotlight on my name, but the offense is a similar dynamic.”

Ekeler showed last year that he could be one of the AFC's top dual-purpose backs. He was fourth in the conference with 1,550 yards from scrimmage as well as establishing career highs in touchdowns (11), rushing (557) and receiving yards. He was 7 yards shy of becoming the second running back in team history to reach 1,000 receiving yards in a season.

That type of production earned Ekeler a four-year contract worth $24.5 million. He joined the Chargers as an undrafted free agent in 2017 and quickly made an impact on special teams before his role increased on offense.

Even though Gordon is gone, Ekeler still thinks the backs on the roster will share the workload. He has only three games of 15 or more carries in his first three years in the league but there were five games last season where Ekeler had 18 or more touches (combined carries and receptions).

Because Ekeler is more of an all-purpose back, he thinks that might be a reason why he is overlooked at times.

“I feel like people have a hard time ranking me. When they think running backs, they usually think of rushing yards and touchdowns,” he said. “I feel like I am efficient when I have the ball in my hands in terms of production.”

Los Angeles will have a new quarterback in Tyrod Taylor while Shane Steichen enters his first full season as offensive coordinator. Taylor will bring an additional aspect to the run game, since the Chargers can add zone reads to the playbook. When it comes to other changes to the offense, Ekeler doesn't think there will be much of a learning curve because there is a lot of carryover from last year.

Ekeler is eager to see how much Justin Jackson and Joshua Kelley can add to the running game. Jackson had a calf injury last year. Kelley was drafted in the fourth round out of UCLA and could take over as a between-the-tackles runner that Gordon was the past five seasons.

“I'm excited about the atmosphere around this team. We're moving into a new stadium, have new uniforms and have a lot of young players,” Ekeler said. “The only thing we are missing right now is that time to build chemistry, But we do have enough time to implement the offense.”