Chargers' Ekeler out at least 3 games with hamstring injury 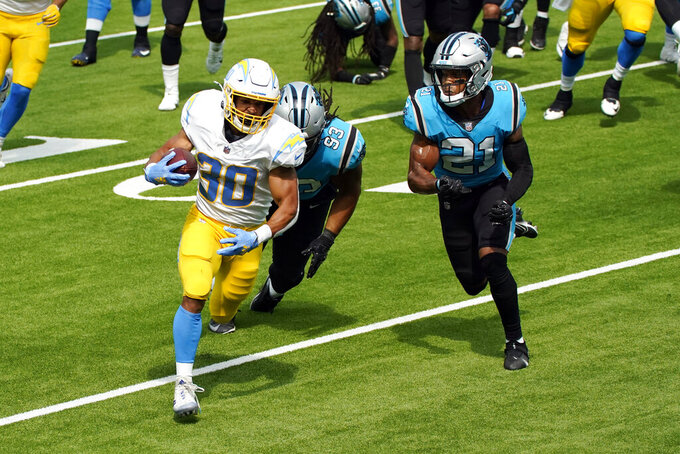 Los Angeles Chargers running back Austin Ekeler (30) runs for a touchdown past Carolina Panthers free safety Tre Boston (33) and outside linebacker Jeremy Chinn (21) during the first half of an NFL football game Sunday, Sept. 27, 2020, in Inglewood, Calif. (AP Photo/Ashley Landis )

LOS ANGELES (AP) — Add Austin Ekeler's name to the long list of Los Angeles Chargers standout players who are sidelined because of an injury.

The Chargers running back will be out for at least the next three games because of a hamstring injury he suffered during Sunday's 38-31 loss to the Tampa Bay Buccaneers. Ekeler was injured during the first quarter and came into the game leading the AFC with 378 scrimmage yards.

Coach Anthony Lynn said on Monday that Ekeler is getting a second opinion on the severity of the injury.

It is likely Ekeler would be placed on injured reserve to free up a roster spot. One of the rule adjustments made because of the coronavirus pandemic is that players placed on IR are not lost for the season, but have to spend a minimum of three games on there.

Ekeler is averaging 5.1 yards per carry, but he is just as valuable in the passing game. He had three 100-yard receiving games last season and was 7 yards shy of 1,000.

The Chargers rushed for only 46 yards and averaged 2 yards per carry against the Buccaneers, who have the league's top rushing defense. Quarterback Justin Herbert finished as LA's leading ground gainer with 14 yards.

Justin Jackson and Joshua Kelley are expected to be the main running backs in Ekeler's absence. Jackson missed the first three games with a calf injury while Kelley has been solid as a rookie. Kelley though has had two costly fumbles, including one near the end of the first half against Tampa Bay that later resulted in a Bucs' touchdown and gave them momentum.

Safety Derwin James (knee) and center Mike Pouncey (hip) are on injured reserve for the season.