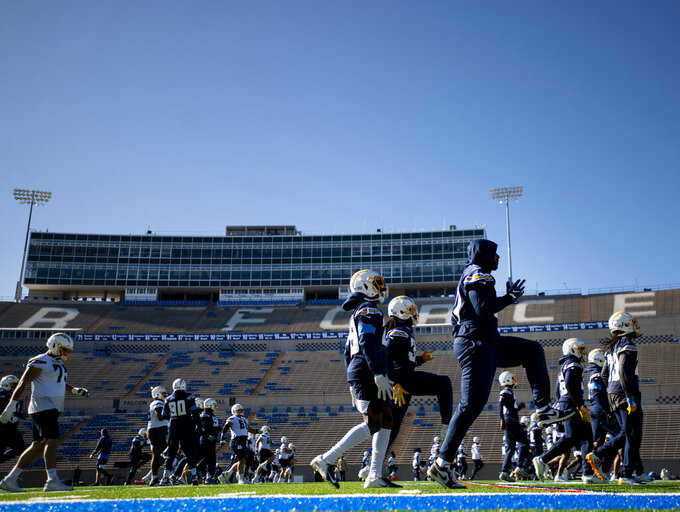 The Los Angeles Chargers warm up before the start of their high altitude practice at the Falcons Stadium at the United States Air Force Academy in Colorado Springs, Colo., on Tuesday, Nov. 12, 2019. The Chargers arrived in Colorado Springs on Monday and will spend the week practicing at the higher altitude at the Air Force Academy in preparation for Mexico City in next weeks' game against the Kansas City Chiefs. (Chancey Bush/The Gazette via AP)

AIR FORCE ACADEMY, Colo. (AP) — The things Los Angeles Chargers running back Austin Ekeler misses about growing up in Colorado: Mountains, all four seasons and being able to catch his breath after a long run.

That thin air left him winded a few times Tuesday during a practice at the Air Force Academy.

Ekeler and the Chargers (4-6) are elevating their game by spending a few days at the academy ahead of their Monday night clash with Kansas City (6-4) at Estadio Azteca Stadium (elevation: approximately 7,300 feet) in Mexico City. Falcon Stadium on the grounds of Air Force is around 6,600 feet.

It's certainly a big change from sea level.

"I've been in California for a long time now," said Ekeler, who went to high school in Eaton, Colorado, and attended college at Western Colorado in Gunnison. "I'm definitely not used to it."

"Going from sea level to 7,300, I didn't feel comfortable doing that," Chargers coach Anthony Lynn said. "It's a little bit of an ease of mind for players. It has a mental effect, I believe."

The Chargers don't do something like this before playing in Denver against the Broncos. Then again, that game is at 5,280 feet.

"I definitely want to give the guys the experience of running around and practicing in this type of environment," Lynn said.

After all, catching Chiefs quarterback Patrick Mahomes should be first and foremost on their minds — not their breath.

Another possible variable? The footing.

Last season, the game between the Chiefs and Rams was moved to Los Angeles because of poor field conditions at Azteca Stadium. Officials at the stadium converted the field back to natural grass, and a delegation of NFL officials recently visited the site, where they found the field in great condition.

Not that Lynn's giving it much thought.

"Both teams have to play on it," Lynn said. "We'll bring our long (spikes) in case we need them. The field is not a distraction for us."

Just in case, though, Bosa said he's "getting prepared to be slipping around."

Along with training at altitude, the Chargers are using their visit to Colorado as a bonding experience. It's a chance to hang out for five or so days.

"We're doing some team-building activities — keeping the guys busy and together," Lynn said. "When we're home, guys leave and go home to their families. Here, they go back to the hotel and still spend time together ... I could see the benefit."

For Ekeler, it's also an opportunity to see his grandparents, who are paying him a visit Wednesday on an off day.

More than anything, he's just relishing being back home.

"Back in California, it seems every day is the same warm day," Ekeler said a day after it snowed around Colorado. "I miss Colorado, the open space. Where we are in California, it's roads, parking lots and buildings. It's good to see the mountains always — the open land.

"Out in California it's summer all year. I grew up around the seasons. That's why I miss them."

NOTES: OT Russell Okung (groin) got in some work on the side Tuesday. "I'd love to see him play," Lynn said of Okung's availability for Monday's game. "If he can't go, he won't go." ... Lynn isn't sure how long right tackle Sam Tevi will be sidelined after undergoing knee surgery Friday. "Could be a couple weeks, could be next week. I don't know," Lynn said. "We'll see how he progresses."