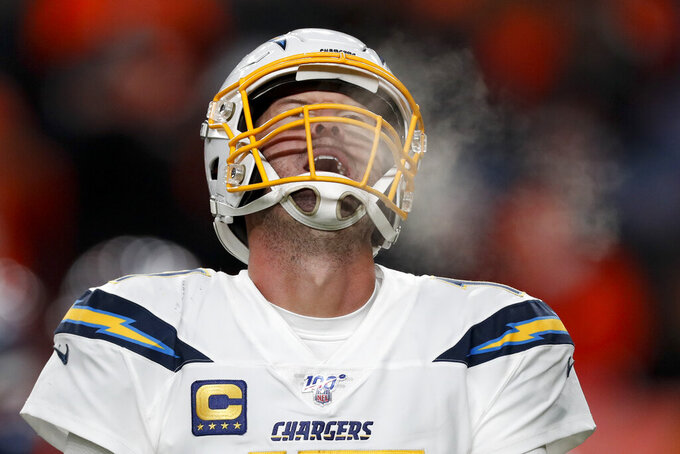 DENVER (AP) — The officials ran past a bewildered Philip Rivers, who appeared to be looking to get one of them to stop to receive some sort of explanation on a game-altering pass interference call.

No one paused to offer him any. This season has been just that for Rivers and the Los Angeles Chargers — inexplainable.

Brandon McManus connected on a 53-yard field goal as time expired following a questionable pass interference call on Casey Hayward Jr. as the Broncos beat the Chargers 23-20 on Sunday.

All eight of the Chargers’ losses have been by seven points or less. This one, though, was particularly tough after Los Angeles rallied from an early 14-point deficit to tie the game. Then the pass interference call — almost par for the course in what’s been a snake-bitten sort of season.

Here’s how wild of year it’s been: The Chargers have scored more points (244) than they’ve surrendered (241). Still, they’re 4-8 and a long, long way from the playoff landscape.

“It seems extra crazy this year in that regard,” Rivers said of all the late drives they’ve had. “It’s a one-score league for the most part. You see it all around the league. But it’s been extra crazy this year for us, considering all eight losses have been by one score. It usually leaves the ball in our hands down a score.”

Such was the case Sunday.

Trailing 20-17, the Chargers were facing fourth-and-1 at the Denver 29 in the final minute. Instead of possibly rolling the dice, they opted for a game-tying 46-yard field goal from Michael Badgley.

On the first play after the kickoff, Broncos rookie quarterback Drew Lock — making his first NFL start — lofted a pass toward Courtland Sutton down the right side. He collided with Hayward and pass interference was signaled.

And understandably, Hayward didn’t agree, either.

“I was trying to find the ball myself,” Hayward explained. “I think I have the same rights to the ball as he does. (The official) made the call. We live with it.”

It's just the latest chapter in a season filled with baffling chapters. The close losses have been in every sort of way, too.

Like on Nov. 18 in Mexico City, when Rivers ended the Chargers’ desperate final drive with a pass to Kansas City safety Dan Sorensen near the goal line with 18 seconds left in a 24-17 loss.

Or the week before that when the Chargers missed tackles in the secondary on Josh Jacobs’ go-ahead 18-yard touchdown in a 26-24 loss in Oakland.

“Tough. Disappointing. Frustrating,” said Chargers receiver Keenan Allen, who had six catches for 68 yards and a diving 36-yard score over the top of Broncos safety Will Parks. “It’s tough to win when you give them a lead like that.”

"Some of the years you look back and when it’s all said and done, and sometimes the 8-8 (seasons) and the rough ones are ones that were most formative in making you tougher," said Rivers, who threw two touchdown passes and an interception. “You don’t necessarily want them or wish for them and I’m not trying to sell a ... 4-8 record, but we keep fighting. That’s the only way we know.”

Although that playoff hope has dwindled, Rivers believes his team will be plenty motivated to finish strong.

“Last I checked, they don’t cancel the season for all the teams that are eliminated,” Rivers said. “We have 16 on the schedule. We signed up for all 16. We play the Jacksonville Jaguars and think it’s at 1 Eastern on Sunday. We’ll all be there and fight like crazy.”