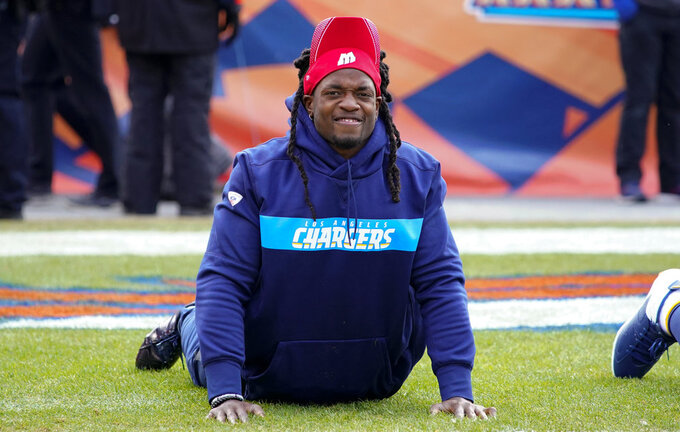 Los Angeles Chargers running back Melvin Gordon wears a University of Wisconsin hat as he warms up before an NFL football game against the Denver Broncos, Sunday, Dec. 30, 2018, in Denver. (AP Photo/Jack Dempsey)

COSTA MESA, Calif. (AP) — The Los Angeles Chargers don't need much of a refresher course on their first-round playoff opponent, considering they played them less than two weeks ago.

The Chargers will make the cross-country trek for Sunday's AFC wild-card round game against Baltimore, which won six of its final seven games to finish 10-6 and capture its first AFC North title since 2012. One of those wins came on Dec. 22 when the Ravens rallied in the second half to defeat the Chargers 22-10.

That loss ended up costing Los Angeles (12-4) a chance at the AFC West and home field throughout the playoffs.

"Round two. That's all I can say about that. It's round two and we have to get ready to play," cornerback Desmond King said after Los Angeles defeated Denver 23-9 in the regular-season finale.

The Chargers will be the first team Ravens rookie quarterback Lamar Jackson has faced twice. Jackson, the 32nd overall draft pick in April, was held to 39 yards rushing against the Chargers, which was his lowest in seven starts. According to SportRadar, only 20.3 percent of Jackson's rushing yards came after contact in the first five games, but against the Chargers all but 4 yards came after contact.

Jackson was able to win with his arm as he completed 12 of 22 passes for a season-high 204 yards. He had come into the game averaging 146.2 passing yards. His best completion was a 67-yard touchdown to Mark Andrews during which Jackson took advantage of play action as he hit his tight end in stride after he split safeties Adrian Phillips and Jahleel Addae.

"I'm not sure how much of an advantage it is going to be because he also gets a chance to see us a second time, too. It is going to be a chess match going into the game," cornerback Casey Heyward Jr. said.

The Chargers will have to adjust to another injury at linebacker after Jatavis Brown suffered a season-ending ankle injury at Denver. Hayes Pullard is expected to move into the spot, but Brown was one of the team's better run stoppers and had a team-high eight tackles in the first meeting against the Ravens.

Another concern is trying to get the offense back on track.

Coach Anthony Lynn said he has some concerns but isn't overly worried since he believes it can get fixed.

Running back Melvin Gordon, who finished ninth in the AFC with 885 rushing yards, tweaked his ankle against Denver, but Lynn said he expects the fourth-year back to be available.

Tight end Hunter Henry will work with the offense this week despite missing the entire season after tearing the anterior cruciate ligament in his right knee during an offseason workout in May. The Chargers have until Jan. 7 to return him to the active roster or place him on injured reserve.

Lynn said he has liked the progress he has seen from Henry during practices and that the knee is holding up. The biggest question is Henry's level of football conditioning.

Los Angeles is sticking to the regular schedule it uses for East Coast games. The players are off Tuesday before practices Wednesday through Friday. They will leave Friday afternoon for Baltimore and have a walkthrough Saturday.

If recent history serves as a guide, the Chargers have done well in their second attempt against an AFC North champion in the playoffs. They lost to Cincinnati in Week 13 during the 2013 season but beat the Bengals in Cincinnati in the first round.

As Lynn noted, not a lot is going to change in the brief time since they last played.

"It's all about execution right now. We just have to stop them," Lynn said. "They're a physical football team that makes you play very disciplined. We have to play better than we did the first time."