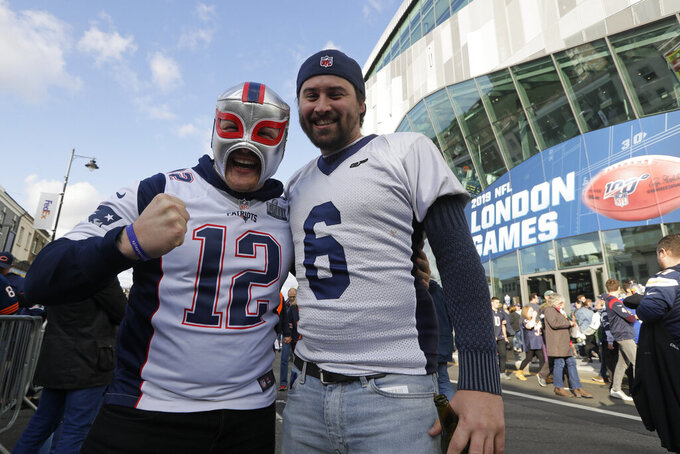 Melvin Gordon is expected to see his first action as the Los Angeles Chargers host the Denver Broncos. The Chargers running back held out for 64 days in a contract dispute before reporting on Sept. 26.

He was activated prior to last week's game at Miami but did not play.

The Chargers will be missing defensive end Melvin Ingram, who suffered a hamstring injury in the first half against the Dolphins.

Dallas receiver Michael Gallup is back against Green Bay after missing what was considered the minimum two weeks coming off arthroscopic knee surgery.

The Packers are without Aaron Rodgers' top threat in Davante Adams, who had already been ruled after injuring his toe last week against Philadelphia. Adams had a career-high 180 yards receiving against the Eagles.

Gallup was the Cowboys' leading receiver when he injured his knee in Week 2 against Washington. The second-year player is now fourth on the team with 13 catches and second with 226 yards receiving.

Dallas left tackle Tyron Smith had already been ruled out with an ankle injury, but right tackle La'el Collins is active after missing two days of practice with a back issue that cropped up this past week. Cameron Fleming is starting in Smith's spot.

Cowboys defensive end Tyrone Crawford will play after missing two weeks with a hip issue that he dealt with throughout the offseason.

Packers linebacker Oren Burks will make his season debut after missing the first four games with slightly torn pectoral muscle. Burks was injured in the first preseason game. Defensive tackle Montravius Adams is back after missing two games with a shoulder injury.

Green Bay cornerback Kevin King is active despite missing practice all week and being listed as doubtful with a groin injury. Running back Jamaal Williams is inactive after sustaining a concussion against Philadelphia.