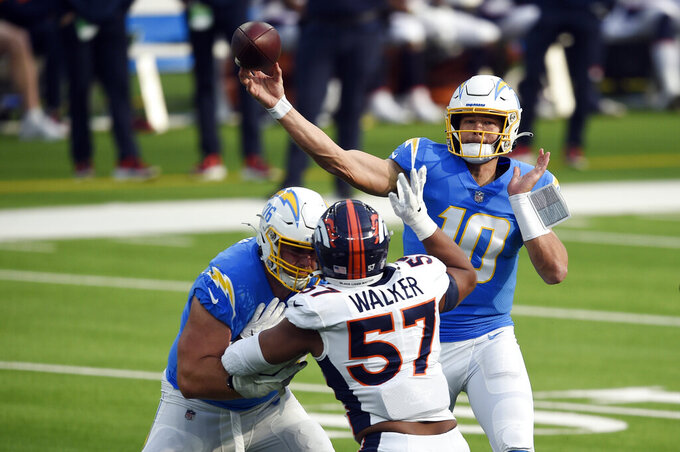 Considering the way 2020 has gone, it might seem like ages since Justin Herbert made his first NFL start.

But for the Los Angeles Chargers rookie, the season has gone quickly.

Herbert and the Chargers wrap up the season Sunday at Kansas City. He made his first start on Sept. 20 against the Chiefs when he found out less than a minute before kickoff that he was playing. Despite the lack of snaps with the first team, Herbert showed right away that he would be a quick study with 311 yards and a touchdown in a 23-20 overtime loss.

“I think you blink and you realize that you’re in (game) 16,” Herbert said. “It feels like it was just yesterday that we played the Chiefs.”

Herbert took over after Tyrod Taylor was taken to the hospital when an injection for a rib injury punctured a lung. Three weeks later, coach Anthony Lynn made Herbert the permanent starter.

“How he handled himself and how he handled the situation, that’s what sold me,” Lynn said. “He was the quarterback of the future and it didn’t make any sense to prolong it. I thought he played well enough to where he could finish the rest of the season and build off that.”

Since then, Herbert has rewritten the rookie quarterback record book. He already has the most touchdown passes (28) and 300-yard games (seven) along with becoming the third rookie to surpass 4,000 passing yards.

Herbert goes into Sunday's game needing six completions to have the most as a rookie (Philadelphia's Carson Wentz had 379 in 2016) and 341 yards to surpass Andrew Luck's 4,374 with Indianapolis in 2012.

Besides the on-field accomplishments, which should make Herbert a favorite for Offensive Rookie of the Year, teammates have been impressed by how quickly he made the huddle and offense his own.

"I love that mentality because it’s easy to work with someone like that,” running back Austin Ekeler said. “It’s easy for me to get out there because that’s kind of my mentality. We can start building that chemistry because we think very similar.”

Kansas City coach Andy Reid said Herbert is a rookie in name only. His 288.1 yards per game are fourth in the NFL and third in the AFC. Even more impressive is that Herbert's 88.1 passer rating while facing pressure is fourth in the league.

“Don’t look at the baby face. You look at the product and his body language when he’s out there and the command that he has. It's like he is a veteran,” Reid said.

Herbert and the Chargers are hoping to complete the year with momentum. They have won three straight since a 45-0 loss to New England and will face a Chiefs team that is resting most of its top players after wrapping up the AFC's top seed and first-round bye.

The challenge for Herbert, offensive coordinator Shane Steichen and quarterback coach Pep Hamilton will be building on what they've already accomplished. Herbert said he is looking forward to diving deeper into the playbook during the offseason as well as continuing to improve footwork.

“There lot of guys on this team that need to get their bodies back and another offseason to prepare and to continue developing in our offense,” he said.