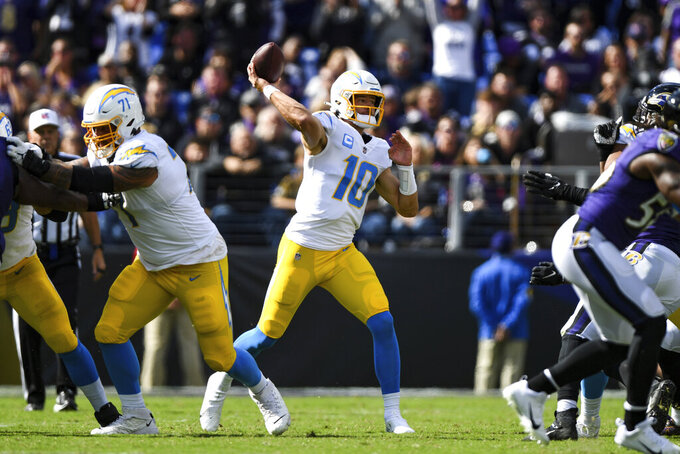 COSTA MESA, Calif. (AP) — Justin Herbert isn't in the complete throes of a sophomore slump. The Los Angeles Chargers quarterback is struggling, though, after a strong start to the season.

Herbert led the Chargers to wins in four of their first five games as well as to the lead in the AFC West. But the Bolts have dropped two straight going into Sunday's game at Philadelphia and are one game behind the Las Vegas Raiders.

“We’re not gonna let two games get us down. It’s all about coming back and handling adversity,” Herbert said.

Besides the struggles in the past two games, which included three interceptions, Herbert had to deal with questions about his right hand after he was limited in practice on Wednesday due to soreness. He banged it on the helmet of a New England player late in the fourth quarter. However, he was a full participant the past two days and said on Friday he was ready to go.

Herbert was fourth in the AFC with a 104.7 passer rating and had a completion rate of 67.1% after five games. The 4-1 start also included three fourth-quarter comebacks.

But Herbert and the offense did not perform at the same level in losses to Baltimore and New England. Last Sunday's 27-24 loss to the Patriots included the first pick-six of Herbert's career and resulted in the go-ahead score for New England. He has also had back-to-back games with a passer rating below 70 for the first time in his career.

Despite the great numbers Herbert has put up in his first 22 starts, there are going to be times when he is still learning on the job, which has happened in the last two games.

“There are going to be times when I make a lot of mistakes and throw interceptions and incompletions. You don’t want to do that but it’s going to happen and I have to learn from those. And hopefully you don’t make the same mistake twice,” Herbert said.

Herbert was among the league leaders in passes over 20 yards last season, but his average air yards per attempt this season is 7.63 yards, which is 24th in the league. Defenses have been mostly effective in limiting Mike Williams and Keenan Allen on deep throws, but the offensive system that coordinator Joe Lombardi brought from New Orleans also stresses more of a short passing game. Herbert has been effective in checking out of run plays and throwing screens or short passes within 5 yards of the line of scrimmage.

He has also had to deal with his receivers having uncharacteristic drops. The Chargers are tied for fourth with 16 drops, according to Sportradar, after having 24 all of last season. Keenan Allen is tied for fifth in the league with five drops, while Mike Williams and Jared Cook have three apiece.

Lombardi said Herbert's recent play and the receivers' drops hopefully can be alleviated with improvements in pass protection and limiting pressures.

“I think that protection will hold up a little better on some other cases," he said. "It’s weathering the storm a little bit, but keep working hard, preparing and maybe trying to find those patterns that you can fix, knowing that some other things can be random. Just being ready to get out there and work every day."

NOTES: Running back Justin Jackson (quad), along with cornerbacks Michael Davis (hamstring) and Asante Samuel Jr. (concussion), are out for Sunday while safety Alohi Gilman (ankle) is doubtful. Tevaughn Campbell would likely get the start opposite Chris Harris Jr. at cornerback, with Kemon Hall and Ryan Smith seeing extended playing time.