Chargers hope late wins can serve as springboard to 2021 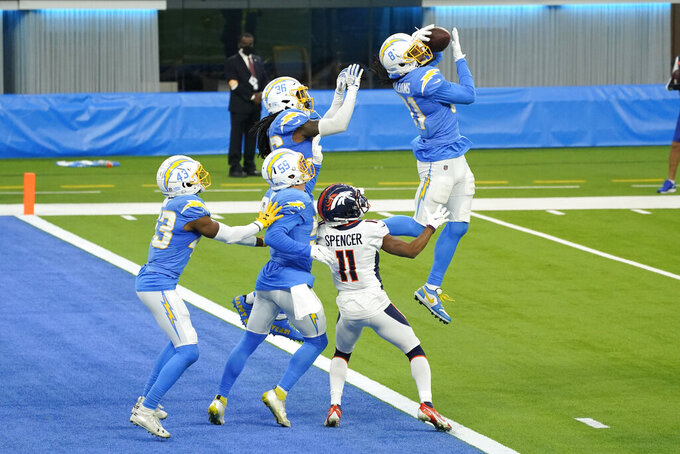 It's too little, too late for this season, but the Los Angeles Chargers' three-game winning streak and ability to come through in close games are giving them hope for next year.

Sunday's 19-16 victory over the Denver Broncos was another example of how Justin Herbert has learned from past late-game mistakes. It was his third straight game-winning drive in the fourth quarter or overtime, making him the third rookie quarterback to accomplish that since the merger.

The other two — Pittsburgh's Ben Roethlisberger (2004) and Tennessee's Vince Young (2006) — won Offensive Rookie of the Year.

“It’s huge. In the NFL you have to find a way to win games. As these games have gone on I think our team has begun to learn and we’ve gotten better. That’s one of the best things to see," Herbert said. “As tough as it is sometimes when you throw picks, you throw incompletions, you lose games, it’s adversity, and it’s going to happen. It’s all about how you react to it."

Herbert's success in the clutch has been huge for a team that often failed in close games. Since the start of last season, the Chargers (6-9) had won only two of 18 games decided by one score until they won the last four.

Lynn knows how a team playing well at the end of a season can carry over into the next year. Los Angeles won six of its final seven games in 2017 before making the playoffs the following season.

“I think it's important how you finish, especially when things don't go your way early, because it could serve as a springboard. I don't know if it will or not next year but I certainly hope so,” Lynn said.

For once, the Chargers did not get behind the chains on first down. They entered the game next-to-last in the league with a 43.1% success rate on first down, but 13 of their 25 plays against the Broncos gained 4 yards or more. The 6.3 yards-per-play average on first down was their second-highest this season.

Getting stops on third and fourth down after Denver converted 9 of its 19 opportunities. The Chargers are ninth in the AFC and 20th in the league with opponents converting at a 42.6% clip.

Michael Badgley rebounded from two fourth-quarter misses at Las Vegas by tying a career high with four field goals, including a 37-yarder for the game-winning points with 41 seconds remaining.

Cornerback Michael Davis struggled in coverage for most of the day, allowing eight receptions for 86 yards. It would have been more if it wasn't for two drops by Denver rookie Jerry Jeudy.

1 — Career interceptions for Mike Williams. The fourth-year wide receiver picked off Drew Lock's desperation pass near the goal line on the last play of Sunday's game. Williams was sent out on defense because Allen, who normally fills that role in Hail Mary situations, didn't play.

The Chargers end the season at Kansas City for the second straight year. They have dropped three straight and 12 of their past 13 to the Chiefs.