Chargers hope loss to Patriots serves as motivation for '19 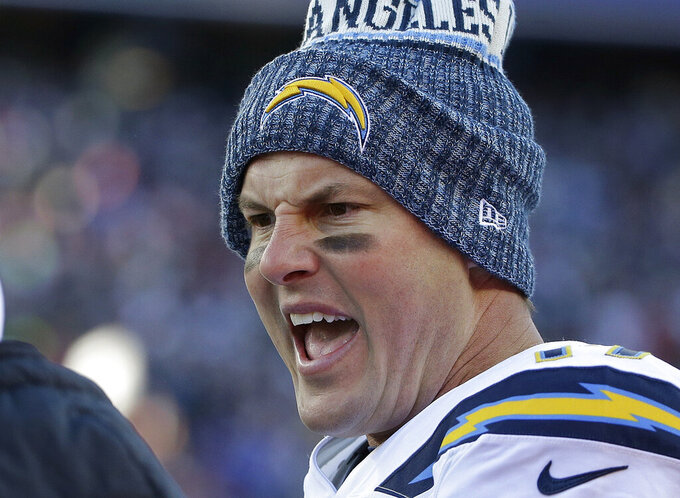 Los Angeles Chargers quarterback Philip Rivers talks to a teammate on the sideline during the first half of an NFL divisional playoff football game against the New England Patriots, Sunday, Jan. 13, 2019, in Foxborough, Mass. (AP Photo/Steven Senne)

COSTA MESA, Calif. (AP) — Anthony Lynn often said that the Los Angeles Chargers winning six of their final seven games in 2017 helped serve as a springboard to this season's success, which resulted in the team's first postseason berth in five years.

Lynn is hoping Sunday's 41-28 loss to New England in the AFC divisional round can serve the same purpose for next season's group.

"We had a good year ... won our first playoff game in a long time but after that butt kicking yesterday no one will be complacent. That's about the only positive I can take from it," Lynn said.

Los Angeles tied for the best regular-season record in the AFC at 12-4, but Kansas City won the AFC West by virtue of a better record in division play. While Kansas City got home field throughout the playoffs and a first-round bye, the Chargers had to head east for two straight weeks. They defeated Baltimore 23-17 in the wild-card round but found themselves down 35-3 at halftime to the Patriots.

The Chargers have posted a winning record in Lynn's first two seasons. They lost their first four games in 2017 but stormed back to finish 9-7. After starting 1-2 this season — which included losses to the Chiefs and Rams — Los Angeles won 10 of 11, which included second-half rallies on the road against Pittsburgh and Kansas City.

The loss Sunday to the Patriots marked the first time all season the Chargers lost a road game outside of Los Angeles. Whether they can take another step next season will be one of many questions going into the offseason.

"I don't think we are that far off," quarterback Philip Rivers said. "I think the biggest thing to acknowledge is how hard it is to get back to where we were yesterday. That was a heck of a task to get where we were. As long as we acknowledge that and don't think it will just happen again will help us."

Here are some things to watch as the Chargers begin their offseason:

ONE MORE GAME: Lynn and his staff still have one more game to coach this season. They were the highest-seeded AFC team knocked out of the divisional round, which means they will be the coaching staff for the Pro Bowl in Orlando on Jan. 27. Lynn said the coaches will take a couple days off before getting ready to head to Florida.

"It's pretty hard to be excited about anything right now. We'd rather be getting ready for next week's opponent but I'm sure it will be fun," Lynn said.

The Chargers had a league-high seven players elected to the Pro Bowl. Safety Adrian Phillips might not make the trip after suffering an arm injury against New England.

RIVERS BEYOND 2019: Rivers has one more season remaining on his contract. There hasn't been any discussion between the two sides, but with the Chargers moving into the new Los Angeles Stadium at Hollywood Park in 2020, trying to get their franchise quarterback locked up with an extension could be easier to accomplish before training camp starts in late July.

Rivers had one of the best seasons of his 15-year career. His 105.5 passer rating equaled his career best from 2008 and '13 and his 8.5 yards per attempt average was his best since 2010. His 68.3 percent completion rate also was the second best of his career.

RETAIN PHILLIPS: Phillips will be an unrestricted free agent and could be one of the top players to hit the market. He was an All-Pro selection after leading the league with 19 special teams tackles. He also started seven games as the third safety and posted 77 tackles, including five tackles for loss. In the playoff win against Baltimore, he became the first player in nearly two years to have an interception and fumble recovery in a postseason game.

GATES FUTURE: Tight end Antonio Gates was re-signed in September following an offseason injury to Hunter Henry. With Henry recovered and Virgil Green serving as a blocking tight end, Gates might be saying goodbye for the second straight season.

Gates, who caught a touchdown against the Patriots, told reporters after the game he would love to play for a 17th season. He had 28 receptions for 333 yards and two touchdowns during the regular season while splitting time with Green.

POSITION OF NEED: Linebacker. Denzel Perryman and Kyle Emanuel, who were both drafted in 2015, will be free agents in a position group that is lacking in depth and experience.