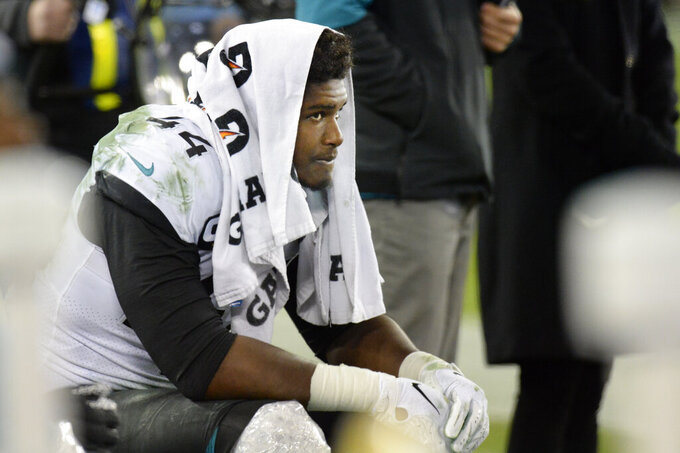 JACKSONVILLE, Fla. (AP) — Close losses have defined the Los Angeles Chargers' season. The Jacksonville Jaguars would take one of those right now.

The Jaguars (4-8) have been blown out in four straight, trailing by as many as 25, 32, 24 and 23 points in lopsided affairs that crushed the team's playoffs hopes and turned the final month of the season into an endless debate about the futures of coach Doug Marrone, personnel chief Tom Coughlin, general manager Dave Caldwell and quarterback Nick Foles.

Jacksonville will try to end the skid Sunday at home against the Chargers (4-8), who have dropped three in a row. Each of those losses — just like the previous five — was by seven points or less.

"It's been tough," said Chargers quarterback Philip Rivers, who turns 38 on Sunday. "Obviously, to be on the losing end of eight one-score games is tough. ... It has been a tough go, but we have the fourth quarter (of the season) left. We can only control what we have left."

Rivers has played a huge role in LA's problems. The veteran has 17 turnovers, including the second-most interceptions (15) in the league.

But he could find refuge against Jacksonville, a team he's tormented over the years. Rivers has thrown for 2,354 yards and 21 touchdowns in eight career starts against the Jaguars. He has 13 TD passes and an interception in his last four against Jacksonville.

"He's a guy that if you make the small mistakes or if you're half a yard off your assignment, he's going to make you pay for it," Jaguars defensive tackle Abry Jones said. "He's a guy that likes to talk a lot of trash and is always willing to back it up. I don't want to hear him talk all day, so we're going to have to go out there defensively and do our job."

What kind of smack?

The Jaguars have given fans reason to swear in recent weeks. The offensive line is a mess. The tight end situation is even worse. The defense can't stop the run and could be down four starters from the opener. Teammates had to be separated in the locker room following last week's home loss to Tampa Bay.

Marrone benched Foles after three lackluster starts — he had twice as many turnovers (four) as touchdowns and was sacked eight times in 10 quarters — and switched back to Minshew for the remainder of the season. Minshew is considerably more mobile than Foles and is at his best while improvising. He has 14 touchdown passes and five interceptions, but also has lost seven of his 12 fumbles.

"He has done some really good things for a rookie," Chargers coach Anthony Lynn said. "It just seems like that team is inspired by him when he comes in the game. ... It's not fluff. If you watch the tape, the guy makes plays. He extends plays, he's creative. He throws with some accuracy and he runs; he's mobile."

Here are some other things to know about the Chargers and Jaguars:

Former Jaguars coach Gus Bradley returns to Jacksonville for the second time in three seasons as the Chargers' defensive coordinator. Bradley still has a home and plenty of friends in Jacksonville. Marrone, defensive coordinator Todd Wash, tight ends coach Ron Middleton and assistant special teams coordinator Mike Mallory all worked under Bradley, who lost in overtime his first game back two years ago.

The Chargers are allowing a league-low 259 yards from scrimmage since Week 6, but they are 0-2 against rookie quarterbacks. Pittsburgh's Devlin Hodges and Denver's Drew Lock won their first NFL starts against Los Angeles. Next rookie up: Minshew.

Chargers reciever Mike Williams, who has at least one reception of 40 or more yards in five consecutive games, is still looking for his first touchdown of the season. It's an odd drought considering he had 11 touchdowns (10 receiving, one rushing) last year.

Marrone pretty much discovered Chargers veteran linebacker Thomas Davis. Marrone was Georgia's offensive line coach in 2000 when he was tasked with scouting a quarterback/free safety at Randolph Clay High in Cuthbert, Georgia. Marrone watched him play, invited him to camps, met his parents and ended up getting a commitment.

"You don't realize what they're going to be, but Thomas is a story that's one I'll always look back on and be really appreciative of, knowing how hard he's worked and what happened and how he's changed everything," said Marrone, who ended up leaving for Tennessee before Davis signed with the Bulldogs.