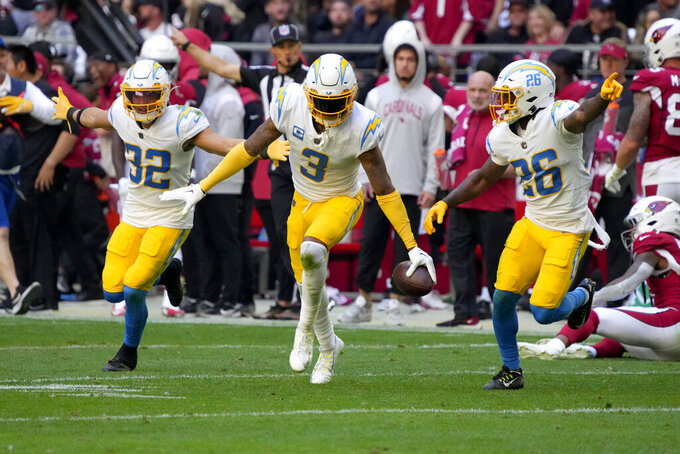 COSTA MESA, Calif. (AP) — The Los Angeles Chargers are unlikely to have two of their starters in the secondary for Sunday night's game against the Miami Dolphins.

Safety Derwin James and cornerback Bryce Callahan were listed as doubtful on Friday's injury report after not practicing all week.

James, who leads all defensive backs with 106 tackles, is dealing with the effects of a quadriceps injury first suffered two weeks ago during a game at Arizona. Callahan has a groin injury that caused him to leave during the second half of last week's game at Las Vegas.

The Chargers (6-6) are going against a Dolphins offense that has two of the league's top receivers.

Los Angeles has allowed a league-high 13 touchdowns of 20 yards or more, including three last week. Opponents have 54 plays of at least 20 yards, which is tied for fifth most.

“It’ll be a big challenge for us, regardless of if we had all of our players out there. They have a very good skill group. They’ve been prolific scoring the football, moving the football,” coach Brandon Staley said. “Our guys have had a really good week of practice. I know that if we have to go into that game with some different guys, then they’re going to be well-prepared, and that we put in a game plan that gives them a chance to go out and compete. This is a very good team that we’re playing.”

Alohi Gilman is likely to get the start if James can't play while Ja’Sir Taylor would fill Callahan's role.

Staley said offensive tackle Trey Pipkins III will miss the game with a knee injury. It will be Pipkins' third game missed in the past four weeks.

The Chargers will get back wide receiver Mike Williams and center Corey Linsley, both of whom have missed the last two games.