Chargers at a loss when it comes to explaining blown leads 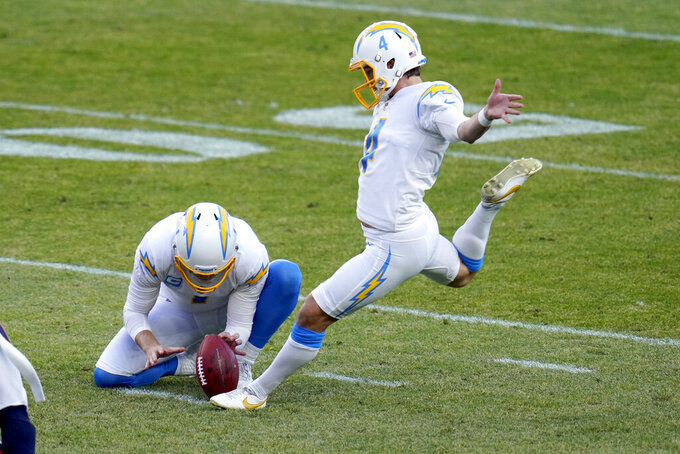 The Los Angeles Chargers are showing they can't hold on to any lead at an unprecedented level.

Anthony Lynn's team is the first in NFL history to squander four straight leads of 16 points or more. On Sunday, they had a 21-point advantage at Denver before the Broncos rallied for a 31-30 victory with the game-winning touchdown coming on the final offensive play of the game.

According to Pro Football Reference, the Chargers had a 99.3% win probability when they were up 24-3 with 7:33 remaining in the third quarter. It is the fifth time in franchise history they have blown a lead of at least 21 points.

So, even though Justin Herbert threw three touchdowns for the fourth straight game and the rushing attack had their best game since Austin Ekeler was injured four weeks ago, Los Angeles finds itself reeling at 2-5.

“We just need to find a way to get it done, you know, find a way to get the win,” center Dan Feeney said. “We have to put teams away when we have the opportunity, not letting teams hang around and give them chances.”

In the first half of games this season, the Chargers are allowing a league-low 137.9 yards and have outscored teams 101-72. After halftime, they are allowing 226.1 yards — third worst in the league — while being outscored 113-78.

The Chargers made a staff change midway through last year when they fired offensive coordinator Ken Whisenhunt. Lynn though has expressed support for defensive coordinator Gus Bradley and has ruled out going down the same road again, even though Lynn said all options are on the table to turn things around.

“Making the staff move is not always the right thing to do,” he said. “This is what we have. This is our staff. These are our players, so right now, as a group we have to get things figured out.”

Cornerback Casey Hayward also expressed support for Bradley and said it was on the players to execute.

“It's usually one bad mistake that leads to something really big and know that as a defense. Gus is calling the right game plan, but it is up to us to bring his calls to life,” he said.

The running game posted only its second 200-yard rushing game since Lynn became coach in 2017, going for 210 yards and averaging 5.5 yards per carry. Justin Jackson posted career highs in carries (17), rushing yards (89) and yards from scrimmage (142) while Troymaine Pope had a career-best 95 yards from scrimmage (67 rushing, 28 receiving). With Bryan Bulaga back at right tackle after missing the past three games because of an injury, the Chargers had 85 yards when running right.

Almost everything on defense, especially after the first quarter. The Chargers look like one of the league's best defenses during the first 15 minutes before they forget how to tackle or cover as well as commit costly penalties.

Michael Badgley bounced back after a rough past two games by making all three field-goal attempts, including kicks from 47 and 52 yards. Badgley had come into the game 4 for 8 on attempts beyond 40 yards.

Nasir Adderley took out one of his teammates from making a tackle during Philip Lindsay's 55-yard touchdown run in the third quarter and drew a 15-yard personal foul for a late hit on another touchdown drive. The second-year safety is continuing to struggle in coverage and consistently takes bad angles when trying to make tackles.

DE Joey Bosa and Pope continue to be in concussion protocol. CB Casey Hayward suffered a calf injury during the fourth quarter, but should be available next week.

15 — Touchdown passes by Justin Herbert, which is tied with Houston's Deshaun Watson for the most in a QB's first six career games.

The Chargers have lost eight straight AFC West games going into next Sunday when they host the Las Vegas Raiders. The eight-game skid is tied with the Detroit Lions for the longest current losing streak in division games.