Chargers may target offensive and defensive lines in draft 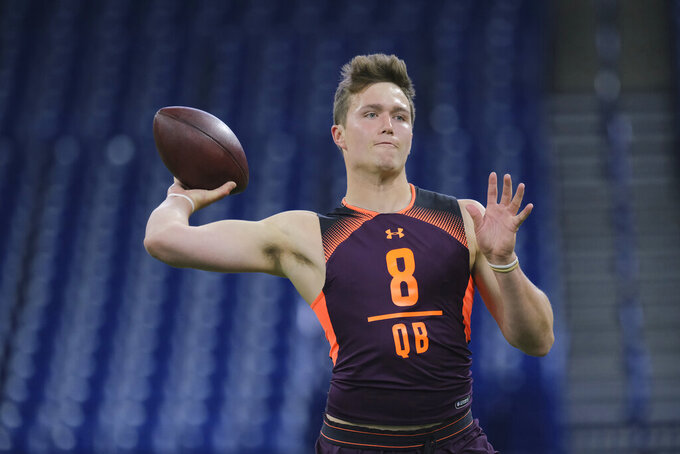 COSTA MESA, Calif. (AP) — Anthony Lynn knows that sometimes the best players on the Chargers draft board will not always correspond to his team's immediate needs.

The Chargers coach told the story during the combine about his first year with the Chargers in 2017 when he said the team needed help on defense. The Chargers' first three selections ended up being offensive players because they were the best players.

"I hate going into a draft thinking that I need this, I need that. I want to take the best player. You give us the best players as a coaching staff (and) it's our job to make them fit," Lynn said.

Tom Telesco goes into his seventh draft as the team's general manager with a pretty solid track record of finding talent. He has selected an eventual Pro Bowl or All-Pro selection the past six drafts with all but one (Jason Verrett) still on the roster.

The Chargers don't have a lot of glaring needs as they approach the draft, but there are still questions about who will get the start at free safety. They also need to find some depth at linebacker and on the offensive and defensive lines.

Some things to watch for the Chargers in this year's draft:

PAIRING SOMEONE WITH JAMES

Derwin James, who went 17th overall, quickly made his impact felt last season at strong safety and was an All-Pro selection. Now the Chargers need to find someone to pair with James at free safety.

The position has taken on a bigger priority after they released Jahleel Addae before free agency started. The biggest reason the Chargers released him was that he was better suited as a strong safety.

Rayshawn Jenkins and Jaylen Watkins are both penciled in at free safety, but both are unproven. Telesco has had his eye on Delaware's Nasir Adderley, who has been projected as a late first- or early second-round selection.

SHORING UP THE OFFENSIVE LINE

The Chargers tied for the fourth-worst blocking efficiency rate last season according to Pro Football Focus. They are set at left tackle with Russell Okung and center Mike Pouncey, but the remaining three spots are question marks. Guards Dan Feeney and Michael Schofield are dependable run blockers, but struggle in pass blocking. Guard Forrest Lamp was picked in the second round in 2017, but has been overmatched and hardly seen the field.

Right tackle Sam Tevi was also a liability at times last season. It would be a reach to take a lineman in the first round, but it is a possibility on the second day.

Defensive tackle has taken a hit during free agency with the departures of Corey Liuget, Darius Philon and Damion Square. If Clemson's Dexter Lawrence could fall to them as James did last year, that would be an ideal scenario.

Mississippi State's Jeffery Simmons could also be available in the first two rounds, but the odds of him playing this season are slim after he tore his ACL during a pre-combine workout in February.

YEAR FOR A QUARTERBACK?

The Chargers are set for this year with Philip Rivers and Tyrod Taylor, but Rivers is going into the final year of his contract and hasn't indicated publicly if he would like to play past the 2020 season. Rivers has said he would like to remain with the team for 2020, when the new LA Stadium at Hollywood Park opens.

Telesco has had some great first-round picks with defensive end Joey Bosa and running back Melvin Gordon, but he has excelled at finding some gems in rounds three or later. Among those are wide receiver Keenan Allen (2013 third round), All-Pros Desmond King (2017 fifth round) and Adrian Phillips (undrafted) and linebacker Jatavis Brown (2016 fifth round).