Chargers offense balanced, but needs to be more productive 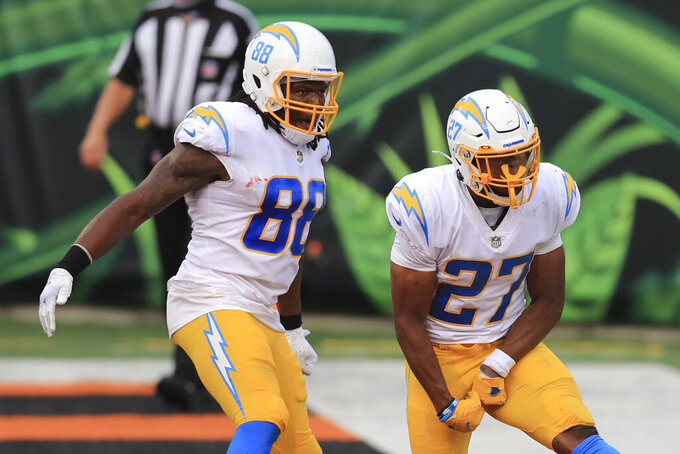 Los Angeles Chargers running back Joshua Kelley (27) celebrates with Virgil Green (88) after Kelley rushed for a touchdown during the second half of an NFL football game against the Cincinnati Bengals, Sunday, Sept. 13, 2020, in Cincinnati. (AP Photo/Aaron Doster)

Anthony Lynn stressed throughout training camp that he wanted the Los Angeles Chargers offense to be balanced. The statistics show they accomplished that in Sunday's 16-13 victory over the Cincinnati Bengals, but the execution was far from desired.

The Chargers ran the ball on 54.9% of their plays, which is the third-highest ground percentage in Lynn's 49 regular-season games as coach. However, they were often behind the chains, struggled in short yardage and had four three-and-out drives in their 13 possessions.

“I like ball control all cases but when you run 41 plays in the first half and only put six points on the board you have to be better,” Lynn said on Monday.

Austin Ekeler and rookie Joshua Kelley combined for 144 yards on 31 carries while Tyrod Taylor was 16 of 30 for 208 yards. While Taylor had some good plays, he came up short on a pair of short-distance runs on fourth down. The run game also struggled in short yardage, including Kelley being stopped on third-and-1, which forced the Chargers to punt with 3:17 remaining.

Cincinnati got the ball back and drove into field-goal range, but Randy Bullock missed a 31-yarder that would have sent the game into overtime.

“We've got to knock some people off the ball. You know, we got a chance to get a half a yard. We got to bump and do that and I was not impressed with that,” Lynn said. “When the defense know you’re going to run the football, you got to be able to find that soft spot in the defense.”

Lynn added that he does anticipate short yardage could improve once the team settles on a short-yardage running back. That is likely to be Kelley, who scored his first NFL touchdown from 5 yards during the fourth quarter to tie the game at 13.

The pass rush generated three sacks during the first half. DT Linval Joseph provided some push up the middle, which allowed Joey Bosa, Melvin Ingram and Jerry Tillery to collapse the pocket.

The Bengals made some slight adjustments during the second half, relying more on the running game and having Joe Burrow make quicker and shorter passes.

“I think we played a pretty good game. We have to have less mental errors and get lined up on the ball faster,” Bosa said.

Getting the downfield pass game working. Taylor was only 6 of 13 on passes in the air 10 yards or more, with his longest completion of the day being 37 yards to Mike Williams during the second quarter (32 yards in air, 5 yards after catch). Hunter Henry also had a 33-yard reception late in the first half, but 13 of the yards came after the catch.

Sam Tevi played well in his first start at left tackle. The fourth-year lineman allowed only two quarterback pressures the 34 times Taylor dropped back to pass and was effective in run blocking as well. Los Angeles averaged 5.7 yards per carry when running left, which was nearly 2 yards more than the 4.0 rushing average for the game.

RB Justin Jackson's run of injuries continue with a quad injury during the second half. Jackson finished with two carries for 4 yards and is likely to miss a couple of games because of the injury. He also had quad problems last season and during training camp.

LB Drue Tranquill broke his left ankle during the second defensive series and “will miss significant time” according to Lynn. ... RG Trai Turner was inactive after suffering a knee injury during practice on Thursday and is questionable for next week.

2 — Takeaways generated by the defense on consecutive drives during the second half, which is big early on considering the Chargers generated a league-low 13 last season. Denzel Perryman forced Joe Mixon to fumble deep in Bengals' territory and Melvin Ingram did a nice job jumping a route on a shovel pass intended for Giovani Bernard.

The Chargers play their first game at SoFi Stadium next Sunday against the defending Super Bowl champion Kansas City Chiefs. Los Angeles has dropped 11 of its past 12 to the Chiefs, including the past six as the host. The Chargers were the home team for last year's game in Mexico City.