Chargers offense goes silent in 2nd half of 22-16 loss 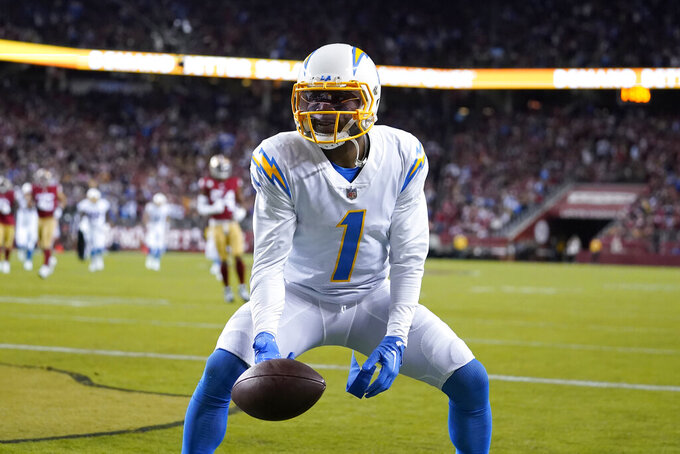 Los Angeles Chargers wide receiver DeAndre Carter (1) reacts after scoring a touchdown against the San Francisco 49ers during the first half of an NFL football game in Santa Clara, Calif., Sunday, Nov. 13, 2022. (AP Photo/Godofredo A. Vásquez)

SANTA CLARA, Calif. (AP) — The Los Angeles Chargers couldn't have gotten off to a much better start on offense with a touchdown drive to open the game.

After that, the short-handed offense stalled and had no answers against a stout San Francisco defense.

Justin Herbert and the Chargers were held to three field goals over their final 10 drives as the running game never got going and the passing game generated no big plays in a 22-16 loss to the San Francisco 49ers on Sunday night.

“We just didn’t execute,” Herbert said. “We had our opportunities. I thought the defense played great all day. They got some big stops, and we unfortunately fell short. We couldn’t execute when we needed to on third down.”

Los Angeles (5-4) came into the game missing both starting tackles, and starting receivers Keenan Allen and Mike Williams, and then lost tight end Gerald Everett in the first half to a groin injury.

But Herbert overcame those absences early, going 4 for 4 on the opening drive that was capped by a 32-yard touchdown pass to DeAndre Carter.

The Chargers wouldn't make it back into the end zone again, averaging a meager 3.33 yards per play the rest of the game.

“You have to change pace against them,” coach Brandon Staley said. “Because if just becomes a drop-back game, that’s where all the risk is in the plan against a team like that. As long as it was close, we wanted to force those guys to play thing straight up.”

Los Angeles settled for field goals in the second quarter on drives that started in San Francisco territory and then again at the end of the first half when Herbert was forced out for a concussion check after Los Angeles moved the ball to the 20.

Herbert returned in the second half but the offense was mostly absent.

The Chargers managed just three first downs and 52 yards — their fewest in any half in a game since 2007 — as Herbert had little time to operate against an aggressive San Francisco defense.

“Guys have to step up and make plays,” running back Austin Ekeler said. “It comes down to us playmakers. We have to play hard, but we also have to make plays. We can’t just do the minimum. And today, we weren’t even able to do that, especially in the second half.”

Even with all those struggles, the Chargers still managed to have three chances to take the lead after falling behind for the first time with just under eight minutes to play.

Los Angeles went three-and-out on its next possession and then got the ball back at its own 1 with 2:03 to play, trailing 19-16.

Herbert's pass on fourth-and-3 from his own 8 went off Joshua Palmer's hands for a turnover on downs and then he threw a game-sealing interception with 53 seconds left after San Francisco had tacked on another field goal.

“They did a great job disrupting the pass lanes,” Herbert said. “That’s a really tough front seven their going up against and they’ve got some pretty good cover guys back there too. They’re really well coached and we just didn’t execute, didn’t get conversions on third down when we needed them and didn’t keep the drives going.”