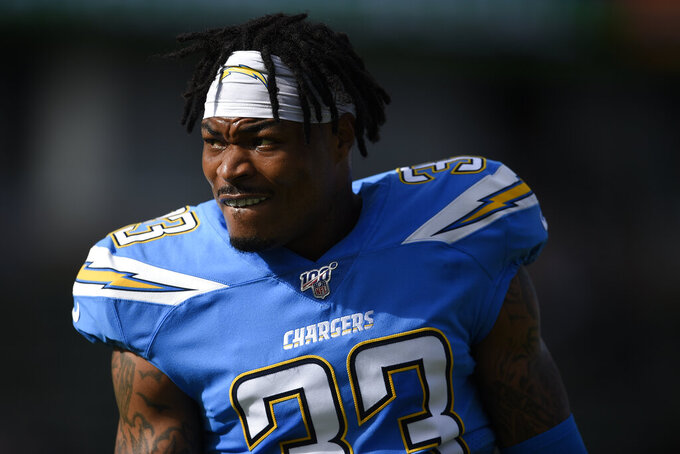 FILE - In this Dec. 22, 2019, file photo, Los Angeles Chargers free safety Derwin James watches during warmups before an NFL football game against the Oakland Raiders in Carson, Calif. The Chargers announced on Friday, April 30, 2021, they have exercised the fifth-year option on James. (AP Photo/Kelvin Kuo, File)

Teams have until Monday to decide whether to pick up the fifth year on the rookie contracts of their first-round picks from 2018.

James was an Associated Press All-Pro selection as a rookie in 2018 but has been plagued by injuries during training camp the past two seasons. He missed last season after suffering a torn meniscus in his knee and played in only five games in 2019 after fracturing his right foot.

He is expected to be an integral part of the defense under new coach Brandon Staley, who was the Los Angeles Rams' defensive coordinator last season. James not only has versatility in pass coverage but he can also line up near the box at linebacker and rush the quarterback.

James was the first defensive back in league history to get three sacks in his first four games as a rookie. He was the first Chargers rookie with at least 100 tackles (109) along with three interceptions and 15 passes defensed.